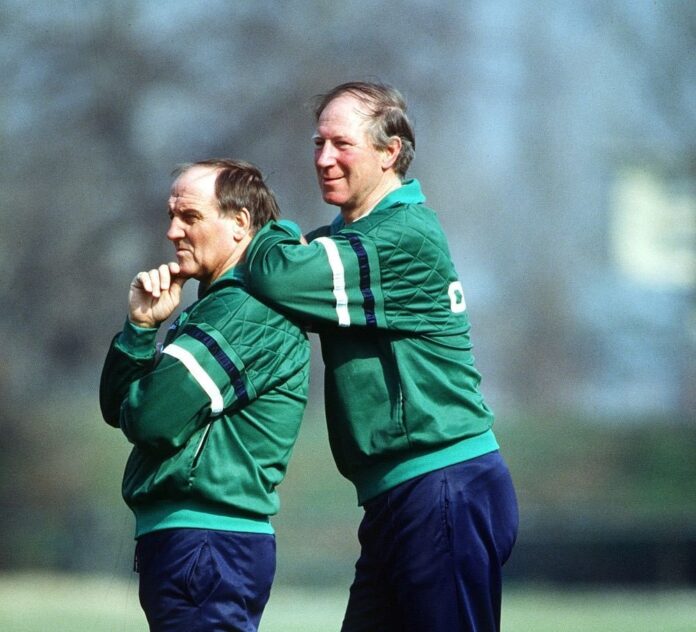 The former Manchester United defender Maurice Setters, who was assistant to Jack Charlton during the Republic of Ireland’s glory years has died at the age of 83 after a battle with Alzheimer’s.

Setters was 83 years of age and had endured a six-year battle with the disease. He was part of the Manchester United team that won the FA Cup in 1963 alongside Irish legend John Giles. The former wing-half made 194 appearances for the Reds following his transfer from West Brom in January 1960.

He was well known here as the right-hand man to Jack Charlton during Republic of Ireland’s golden era between 1986 and 1996.

He was first hired as Charlton’s assistant at Sheffield Wednesday in 1977 on what was the first part of a near 20-year long working relationship with the late ‘Big Jack.’

When the England World Cup winner took on the Ireland job in late 1985, Setters was alongside him to help plot a course to Euro 88 – Ireland’s first major finals.

Setters also took charge of the Under-21 side, but never reached a finals despite great talent often at his disposal.

He was also by Jack’s side at the histoty making Italia ’90 and USA ’94, before stepping down alongside Jack after losing a Euro 96 playoff to Holland at Anfield in late 1995.

Assistant Manager to Jack Charlton and a former Ireland Under-21 Manager, Maurice played a key role in the success of the Irish team in the 1980s and 1990s

May he Rest in Peace pic.twitter.com/nzasAovwZs

We are deeply saddened to learn of the passing of Maurice Setters.

Maurice played 194 times for United in the 1960s, winning the FA Cup in 1963 and captaining the team on a number of occasions.

We send our sincere condolences to those closest to him. Rest in peace, Maurice.

Can Of Beer Catalyst For Man Killing Friend