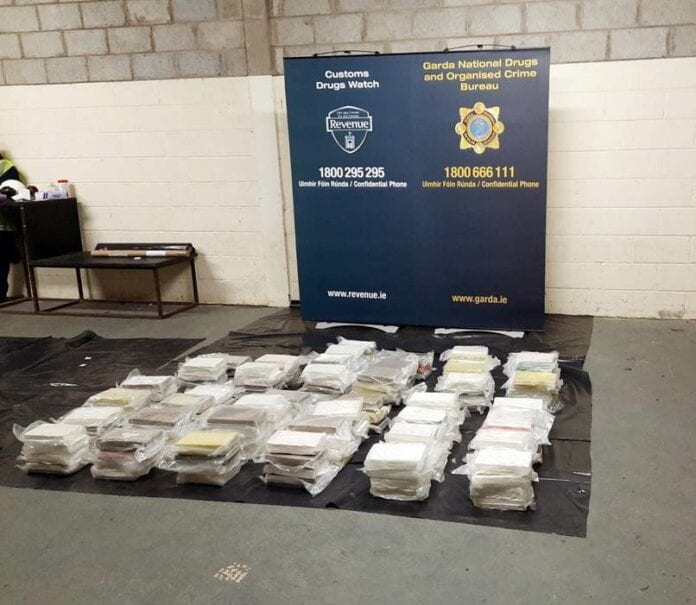 Revenue officers seized approximately 127kgs of drugs, suspected to be cocaine, with an estimated value of over €12 million at Ringaskiddy Port, Co. Cork.

Investigations are ongoing following the search of containers that arrived into Ringaskiddy Port from Central America.

“Combating the smuggling of controlled drugs such as cocaine into this jurisdiction, in collaboration with An Garda Síochána is a priority for Revenue. Today, Revenue’s Customs Service deployed the full suite of our specialist search resources to control this vessel from Central America including our Mobile X-Ray Scanner, Detector Dog teams, Container Inspection teams and Deep Rummage officers from our Customs National Maritime Service. Today’s seizure of cocaine will have a significant impact on organised crime and demonstrates the hard work that is undertaken every day by Revenue’s Customs Service and An Garda Síochána in confronting this threat. The collaboration across both agencies was significant in the successful outcome of this operation.”

Assistant Commissioner John O’Driscoll who is head of Organised and Serious Crime within the Garda Síochána, said:

“A joint operation undertaken today involving participation by the Garda Síochána, through the Garda National Drugs and Organised Crime Bureau and the Revenue Customs Service, that resulted in the seizure of a substance believed to be cocaine with an estimated street sale value of 12.04 million euro, demonstrates the potential of collaborative working relationships involving partner agencies, in tackling importation of controlled drugs that harm our communities.

The Garda Síochána will continue to work with others at a national and international level in targeting the importation and supply of illicit drugs and the organised crime gangs that benefit from such activity”.

This operation was part of Revenue’s ongoing joint investigations targeting organised crime groups and the importation, sale and supply of illegal drugs. If businesses or members of the public have any information regarding drug smuggling, they can contact Revenue in confidence on Confidential Phone Number 1800 295 295.