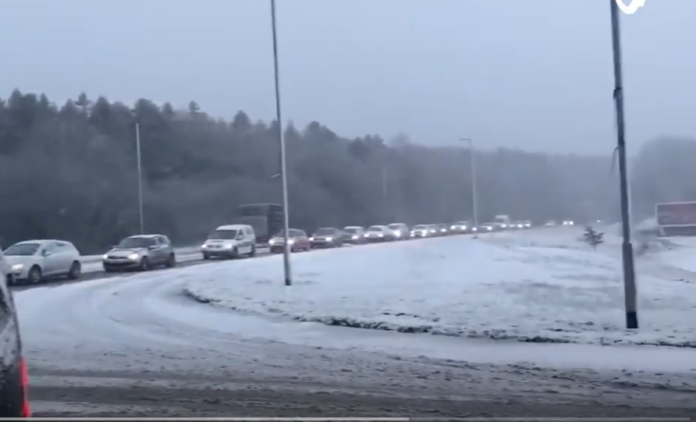 Met Éireann have issued a Status Yellow low temperature and ice warning for the whole country. Temperatures are expected to hit -4 degrees tonight as the cold snap continues to hit this week.

The warning takes effect from 5pm this evening until 11pm tomorrow. In that period, temperatures are to hit between -4 and zero degrees.

Mét Eireann have also warned of ice forming on untreated surfaces. Conditions are forcasted to be dangerous.

In Northern Ireland, Armagh, Antrim, Tyrone, Fermanagh, Derry and Down have been issued with a warning. This status yellow warning takes effect from 2pm this afternoon until midday tomorrow according to Met Éireann.

This morning, snow and light sleet spread southwards throughout the morning. Accumulations of snow were reported in several areas.

Today, they also tweeted, “So cold out there today!!! Stay warm because the temps will only reach 1-4 degrees today with more wintry showers & more on the way tonight with temps as low as -4! The bright side is that there’ll be some sunny spells”.

Following the Met Éireann warning. Drivers have been urged by AA Roadwatch to reduce their speed as it can take ten times longer to stop a vehicle on the road. Lying snow will gradually melt. This will lead to icy conditions as frost tends to set very quickly after nighfall.

Local councils have placed grittings on the main roads to lessen the danger on roads. Drivers are also asked to only make essential journeys.

Conditions are expected to improve later this afternoon. Temperatures are also expected to rise above 5 degrees today.

Meanwhile, Met Éireann have stated that tomorrow will see widespread frost and ice to start with. Temperatures are expected to reach no higher than 3 degrees.

Ana Kriégel Accused Tells Court She ‘Asked Him Out’ Before Disappearance