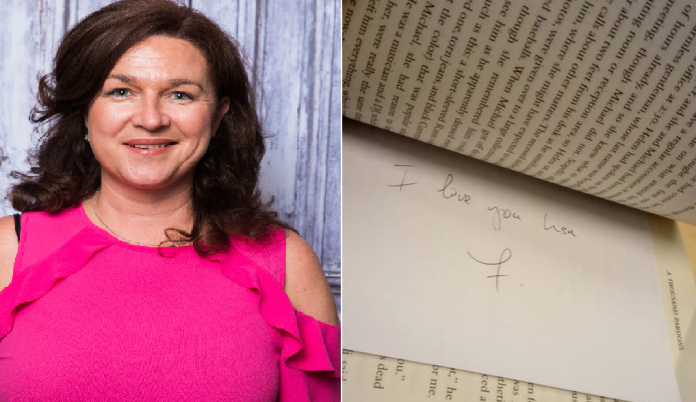 Nova Night’s Lisa Gernon was surprised to find a ‘message’ from her late dad hidden in a book she picked up while out shopping!

The note, which said ‘I Love You, Lisa’ was left sitting in a novel which had been handed into the NCBI second-hand book store in Blackrock, Co Dublin.

But on his one year anniversary, Lisa booked herself a holiday in an effort to shine a light on the sad time of year.

However, when she was out shopping, prepping for her break – Lisa stumbled across a book called A Thousand Pardons.

Flicking through the pages, the presenter found a note stating ‘I love you, Lisa’ signed with a letter and while many think that letter is ‘F’, Lisa told the Irish Sun she is going with a ‘T’ and that it’s a message from her dad.

Lisa revealed her dad always encouraged her to ‘keep going and be strong’ and following a tough year that is exactly what her family is trying their best to do.

“So when something like this happens it just makes you smile, the book is the best 50 cent I ever spent.”

Lisa also commented that her dad received numerous blood transfusions and platelets during his treatment and would like to encourage anyone who can to donate blood.

How amazing is this? Has anything like this ever happened to you?

Local Councillor Wants To Ban Classic Literature That He Hasn’t Even...