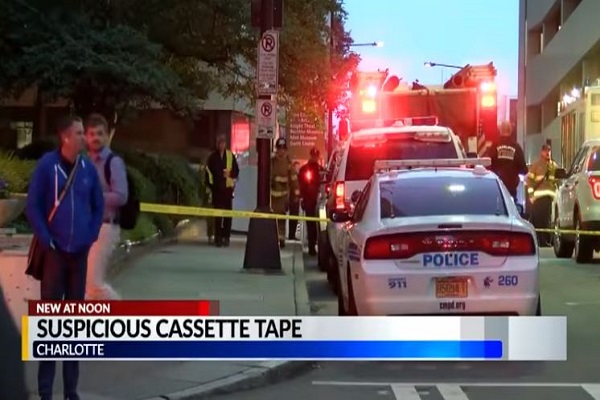 In the wake of recent parcel bombs mailed to notable Democrats, American media have been urging people to remain alert and on the lookout for suspicious items. Yesterday morning. October 30th, US police were called upon to respond to a possible situation at a building in Charlotte, N.C.

Authorities thought they could be dealing with a potential explosive, luckily the contents of the package were just a cassette by Journey!

According to WBTV, the parcel delivery area of Duke Energy Building in Charlotte discovered a manila envelope that was addressed by hand and from out of state.

Workers at the building called the police, who brought in a bomb squad and a K-9 unit to investigate the suspicious looking device. The building was evacuated and roads were shut down, however, it transpired to be a false alarm. According to Ultimate Classic Rock, the sender’s motives for mailing the tape and whether it was a specific Journey album or a homemade mix, remain unknown.

Last week, pipe bombs were mailed to 14 addresses, including former President Barack Obama, the New York offices of CNN and several other Democrats and noteworthy critics of the Trump administration. In all cases, the parcel bombs were discovered before they could cause any injuries.

Cesar Sayoc was apprehended in Plantation, Fla, on Friday, in connection with the deliveries. According to reports, he was residing in a van covered with pro-Donald Trump and anti-Democratic messages, and according to a previous employer, self-identified as a white supremacist.

Iggy Pop’s “The Passenger” Finally Gets A Music Video After 43...