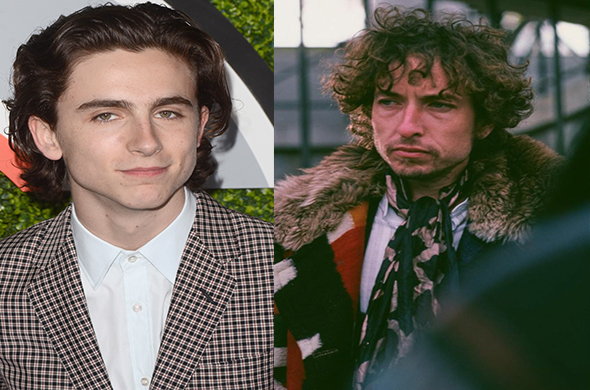 The actor Timothee Chalamet has been cast as the legendary Bob Dylan in a film entitled Going Electric.

The movie will show how Dylan made it from folk singer to rock star and will focus on when he started to use the electric guitar in 1965.

According to UCR, Chalamet is now one of Hollywood’s most popular young stars. He started out as most actors do, playing supporting roles in such films as Interstellar and the ensemble comedy Love the Coopers.

The New York-born 24-year-old actor was nominated for an Academy Award for his role in the 2017 coming-of-age film Call Me By Your Name.

He is currently on screen in the film Little Women. Going Electric will be directed by James Mangold, who previously directed 2005’s Walk the Line, which portrayed the life of Johnny Cash.

According to reports, Dylan is working alongside Mangold and the film’s production company and Jeff Rosen, Dylan’s long-time manager is among the picture’s producers.

This is not the first time this musical icon has been portrayed on the big screen. In 2007, the film I’m Not There Dylan was depicted by six different actors, including Cate Blanchett, Christian Bale and Richard Gere.

Blanchett stood out for her performance and won a Golden Globe for ‘Best Supporting Actress’.

A 2019 documentary titled Rolling Thunder Revue, about Dylan’s 1975 tour of the same name is now out on Netflix, directed by Martin Scorsese.

I’ve been meek and hard like an oak
I’ve seen pretty people disappear like smoke
Friends will arrive, friends will disappear

If you want me, honey baby, I’ll be here pic.twitter.com/AkujdMdZHE

Woody Allen Offered The Chance To Respond To Allegations Made In...