Home Entertainment Angus Young Came Up With Highway To Hell While On The Toilet! 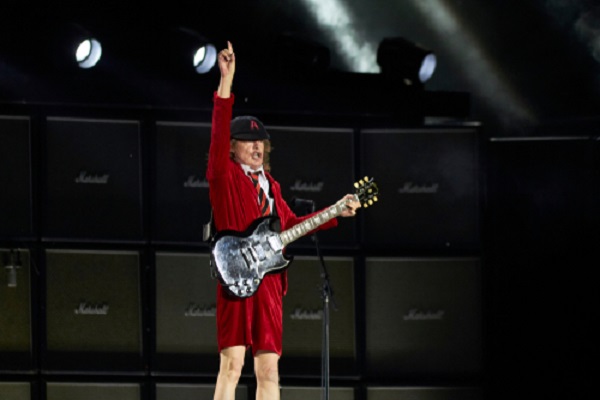 AC/DC’s Angus Young claims that he came up with the song “Highway To Hell” whilst on the toilet.

The guitarist said in a recent interview that the premise for the track came while he was having a bathroom break.

“We’d been in Miami, and we’d been in a rehearsal room and that’s what we were doing. We were putting together new tracks” Young said.

He added, “And we’d been there a couple of weeks and we were going a bit slow. And then I had come in one day with (late AC/DC co-founder and guitarist Malcolm Young) and just before we got in, I said, ​’I’ve got a good idea in my head”.

Angus Young “I had this thing about the drums”

Young also paid tribute to his late brother and co-founder of ACDC, Malcolm Young and explained his role in producing this iconic track.

“So I got in and he came in, and I started playing the beginning, the intro. And so I was doing the da-da-da, da-da-da”.

He continued, “And then I said to Malcolm, I had this thing about the drums. And I said, ​’I just want it to come in in the right spot.’ And he said, ​’Okay.’ Malcolm got behind the drums and he said, ‘Right, you let me know when you hear the downbeat, the first downbeat of what you want.’ So that’s what I did. I said, ‘I’ll do my drop,’ and he said, ​’And I’ll follow your foot.’ So he came in with the beat. That’s how we set it up”.

Angus explained that the music was there, but the lyrics were not. He described how Malcolm asked him if he could try to come up with something.

“And then I came in there and I said, ​’I’ve got it. Highway to hell.’ And I was over the chords that we had tried out through a chorus. And he went, ​’Yeah, that’ll work.’ And he said, ‘If we spread it out a bit into full singing thing.’ So he came up with a spread of it, ‘(Singing) Highway to hell”.

In January, Angus Young also denied that Guns N’Roses’ Axl Rose had every worked on new material with the band. See here.

‘A Foreigners Journey’ To Play The Button Factory On May 5th