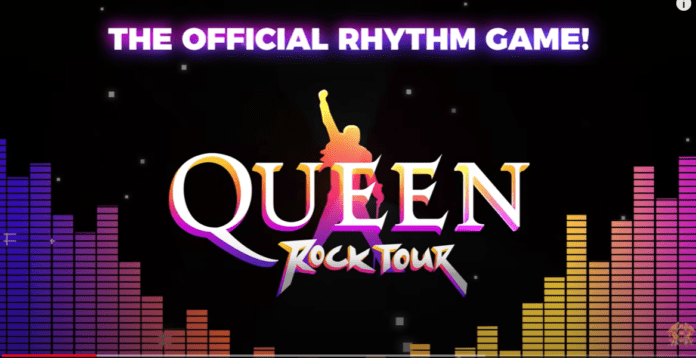 Queen have launched their first mobile game. Queen: Rock Tour is available for Android and IOS devices now. It will allow players and fans of the band to relive live concerts from the past as well as play along to their hits.

“Be a Lockdown Rock Star!” said Brian May on the game. He added, “No turning back!”.

In the game, fans will be allowed to score points by playing along to 20 of the band’s biggest hits. Hits include “Bohemian Rhapsody”, “Radio Ga Ga”, “We Will Rock You”, “We Are The Champions” as well as, “I Want To Break Free”.

To add to the fun, fans will also be able to choose from a number of different venues associated with Queen concerts from the past. These include London’s Rainbow Theatre 1974 and Rock in Rio 1985.

Fans can also choose from “40 official and iconic costumes from the band’s history”.

A statement was released, “With live music in lockdown and the return of tours still uncertain, rock group Queen has come up with a safe alternative, no masks, no social distancing, just the good old fashioned live experience”.

“Queen: Rock Tour gives players a chance to experience the majesty and might of the Queen live experience on their phones supported by extensive attention to detail contributed by the official Queen archives and experts”.

“Hit the stage and perform with the entire band as you unleash your music talents to play thrilling guitar riffs, heart-pounding drum solos and much more. All you need to do is tap the tiles in time with the rhythm!”.

Creative Director for the game’s developers Gameloft, Cedric Ratajczak said this, “Our ambition was to push the boundaries of music and gaming with a fun and rewarding experience that would put players in Queen shoes at pivotal points in their career and make them perform in real-time Queen’s live music unlike ever before”.

Ratajcak added, “The creative challenge was to modernise the traditional rhythm-game genre with innovative and mobile-friendly twists inheriting from hyper-casual gaming, and with a unique and happy visual style that offers a timeless look to the band, appealing to the new generation of players”.

You can purchase this game from Google’s Play Store and Apple’s App Store now. The initial purchase comes with 3 complete songs while the full 20 come via in-app purchase.

John Lyndon Show Cancelled “Due to the Aggression” of His Tour...