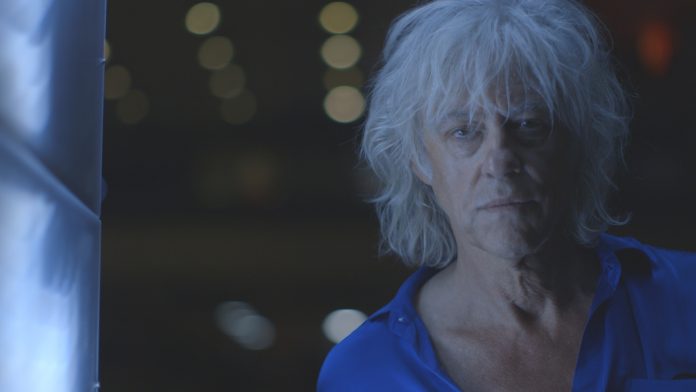 In a major coup, the Dublin International Film Festival is thrilled to host the big screen world premiere of Citizens of Boomtown, the true personal story of The Boomtown Rats, immortalised on screen, produced and directed by long-time friend Billy McGrath.

Bob and the ‘Rats’ will rock the red carpet at Cineworld on March 3rd for what is sure to be one of the most talked about nights in the festival and you can click here to book tickets.

Citizens of Boomtown explores the musical and social legacy of Ireland’s first rock superstars who changed their own lives, helped to change Ireland and with Live Aid changed the world.

Director Billy McGrath digs deep into the band’s history, its remarkable songbook and highlights the key moments of its huge success and subsequent fall in 1985. Why did this ‘gang’ of friends from Dun Laoire get together? And then break- up? What happened to them all afterwards? And how come the band regrouped in 2013?

Citizens of Boomtown is also the name of the bands first new studio album for 36 years which will be released on March 13th ’20.  On the same date Faber Music will publish a book of lyrics and reminiscences by Bob Geldof entitled ‘Tales Of Boomtown Glory’.

The Boomtown Rats recently unveiled the first new song from Citizens of Boomtown.    Entitled ‘Trash Glam Baby’ the single is written by Bob Geldof and is produced by Rats bassist Pete Briquette. Performers on the song are original Rats – Bob Geldof on vocals, Pete Briquette on bass, Simon Crowe on drums and Garry Roberts on guitar – with the addition of Alan Dunn on piano and Darren Beale on guitar.

Says Bob Geldof: “Back then I’d written a song about the amazons I’d encountered making the scene in the late 1970s: ‘She’s So Modern’ was a hit. [“She’s so 20th century/She’s so 1970s”]. A millennium and 2 decades later down at the S-bend of the King’s Road, that squiggle that becomes the Worlds End and where those girls would inhabit Lloyd Johnson’s and Vivienne Westwood’s shops, the glam has gone and moved east. But Vivienne is still there. Now opposite and beside her shop Sex there are 3 decent charity shops. I go there to check out cool shirts etc. On a Saturday in 2017 there was a glorious kid of around 16/17 talking to her friend behind the counter. She was fabulous. Like a bastard hybrid of The New York Dolls and early Roxy Music. A sequined tramp. A living glitter ball. They were moaning about it being Saturday and nothing to do and no money to do it with. The usual anthem of the bored weekend. She didn’t look consciously “retro” or anything, she looked wonderful and beautiful in that damned youth way. She wasn’t beautiful (but she was), a pleasant, normal girl from the blocks down the road, who intuitively understood the theatre of the self, which that peculiar part of the world has always engendered since….oh since the bohemians of the late 19th century through to the 60s and the Stones, the 70s and The Pistols, the 80s and Duran’s/Anthony Price shop and then – like the rest of the 90s – not much. But here she was again, doing that unique thing English teens uniquely do, a grumpy, normal English teenager being extraordinary, looking the bollox. She should be a song. Here she is. She’s so 21st century….”

Formed in 1975 in Dublin The Boomtown Rats became part of the burgeoning punk scene. In the UK they toured with the Ramones and Talking Heads, rocking and mocking the status quo alongside the Sex Pistols, The Clash, The Jam and The Stranglers. They became one of the biggest bands of the late 70s/80s with a string of top ten hits and platinum albums. Making history as the first Irish band to have a UK no 1 hit with ‘Rat Trap’, they went on to top the charts in 32 Countries with ‘I Don’t Like Mondays’ and racked up 6 era-defining albums: ‘The Boomtown Rats’ (’77), ‘A Tonic For The Troops’ (’78), ‘The Fine Art Of Surfacing’ (’79), ‘Mondo Bongo’ (’80), ‘V Deep’ (’82) and ‘In The Long Grass’ (’84). In 1984, inspired by a TV report on the famine in Ethiopia, Bob Geldof organized the star-studded Band Aid and co-wrote “Do They Know It’s Christmas,” one of the biggest-selling singles in history. The next year he organised Live Aid.

The Boomtown Rats will tour the UK in 2020. The full list of shows is: