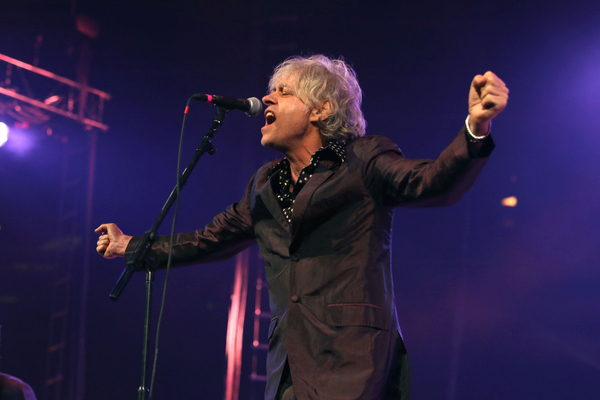 We hit up Vinyl in Kilmainham and guess who made an appearance? Yes – Bob Geldof, the man behind the genius of The Boomtown Rats and he shared some little secrets from behind the scenes.

It was a weekend for exactly that, little secrets, as Aslan also let us in – revealing that Crazy World is far from their favourite song – but there was something incredibly tongue in cheek about Bob’s chat and we can’t stop laughing.

Bob shared the stage with Pete Paphides to discuss the early days of the Boomtown Rats, the band’s punk/rock success, international fame and why he’ll always be a musician.

While the discussion held some sobering moments surrounding his daughter Peaches and his relationship with Paula Yates, it was the formation and building of the band throughout Ireland that really had the crowd enthralled.

In typical Bob fashion, nothing was straight forward and the building of momentum around the band was something which led to a few crossed wires with a new group of Irish ‘feminists’.

The Boomtown Rats came about in September of 1975, with a love for The Rolling Stones but the discovery of Bob Marley.

Upon hearing how Marley made Babylon by Bus, it gave Bob and the rats the optimism that they too could ‘make a noise’, however their first port of call was a name – a name that sparks an idea before you even see or hear the band.

Geldof and co decided once they had the name selected, they should create a bit of a fuss about town, creating rock ‘n roll posters that annoyed people and pinned them across the city.

However, it was a time of change, no matter where you went around the city ‘Clapton is God’ was sprayed everywhere, so Bob explained: “I sprayed ‘Geldof is God’ on a t-shirt and wore it myself.”

“It annoyed people, because nobody knew who we were, they were thinking who are these geezers. So, we made some beautiful, gorgeous posters too. They were sexy, a beautiful pair of long legs, with stockings on and nine-inch heels.”

But then the real fun began: “Feminism was beginning to gain traction as a political idea rather than just simply an idea, it had a focus.”

The band put the posters up all around Dublin, but they didn’t go down as well as they had hoped!

“Women in Trinity and UCD, now with something to focus on, they went around with purple marker writing ‘sexist’ over the posters… this went on for three weeks… and I was like ‘what’s the f**king problem?'”

There you have it – in the early days of The Boomtown Rats, Bob Geldof was attacked by a group of emerging feminists for displaying his legs on posters around Dublin – nonetheless, it would seem the work clearly paid off!