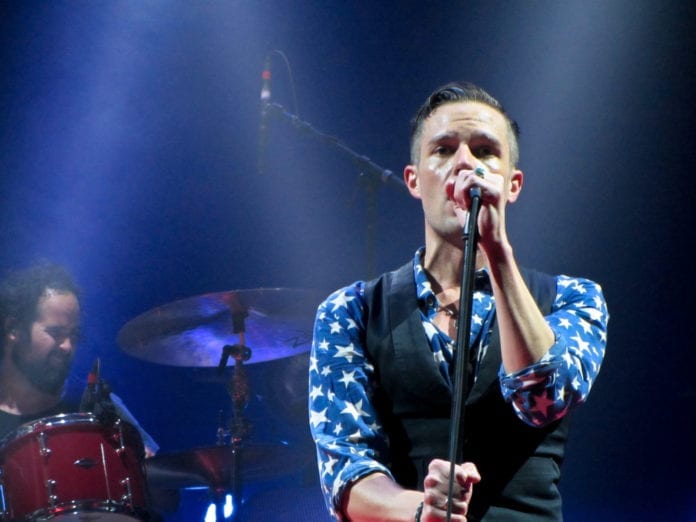 Were you lucky enough to get your hands on tickets for The Killers at the 3Arena Dublin this morning? If you were, we’re sure you’re also eagerly awaiting the release of their upcoming album ‘Everything Everything’ too. Brandon Flowers speaks to NME about the lyrics!

There has been a lot of talk about The Killer’s upcoming album ‘Wonderful Wonderful’. Front-man Brandon Flowers has recently said that the lyrics on the album are ‘the most personal and bare that he’s ever been’.

Speaking to NME before their massive gig in Hyde Park as part of the British Summer Time Festival at the weekend, Flowers was asked about whether the recent events in the US and around the world have inspired his lyrics to be more political.

“I’m turning it around. I’m turning the pen around on myself,” Flowers told NME. “I’m looking in the mirror on this record and focusing a lot on my own personal experiences. Instead of just drawing upon all these experiences and maybe using them in other songs, I am going straight for it with this and singing about my life and my family and that’s something different for me.

“What I like about it is that songs that I love to perform the most are songs that sort of went into that territory and connect with people. Even ‘Mr Brightside’ was a personal song, or Read My Mind – these are songs I love to perform, tend to come from those real places. I really wanted to do that more on this record.”

“This is the more tender side. I’m more bare than I’ve ever been” Flowers added.

The upcoming album, ‘Wonderful Wonderful’ will be the band’s first release since their hugely successful ‘Battle Born’ in 2012.

The band will play 12 dates across the month of November, including The 3Arena, Dublin on Thursday the 16th of November. Check out the rest of the dates below:

Ozzy Osbourne Confirms Film Biopic Is In The Pipeline