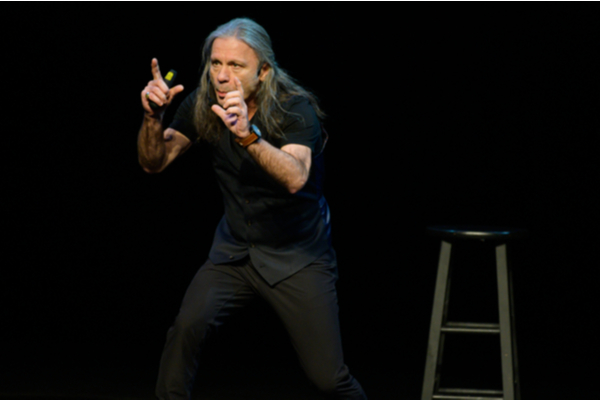 Bruce Dickinson has admitted that he has been guilty of wearing “some of the most rediculous trousers in the world”. He also added that he is not surprised that he has not been invited to “Paris Fashion Week”.

Dickinson is to begin a spoken-word tour this Summer called “An Evening With Bruce Dickinson”. The tour will have six dates, beginning in Brighton on August 1. It will finish in London on August 10.

Bruce explained where he got the idea to do spoken word gigs.

“It all started out years ago when I did this biography, ‘What Does This Button Do?”, he said.

“And they said, “Well, let’s go on a short tour doing readings from the book.’ And I went, ‘Well, that’s a bit boring. Why would anybody just turn up? They can read the book themselves.’ So I sort of enhanced it with a few ripe stories, and it went down very well. And then I added to it with a bit of improv. So the last 45 minutes is based on something that I saw [(English writer, raconteur and actor) Quentin Crisp, of all people”.

“When I was at uni, my then-girlfriend took me to see ‘An Evening With Quentin Crisp”, he continued.  “So I went along. He was incredibly witty — fantastically entertaining”.

“The last half of the show, though, was him coming out and riffing off of cue cards that the audience had written for him. And I always remembered it. So I thought, ‘I wonder if I could do something similar”.

He also added, “Effectively, when the people show up, they will be given cue cards. Scribble down what you like — insults, whatever it is. I take them backstage during the interval and very rapidly turn that into some kind of script”.

“They can ask about anything”

Dickinson explained the questions that can get written on these cue cards. The questions have ranged from general enquiries about Iron Maiden to one fan asking did the singer recall meeting his mother in a Budapest hotel room in 1983!

“They can ask about anything”, he said.  Some of them ask about the band. “You get unwitting ones where people will say… It was fantastic — somebody wrote on a cue card, ‘Do you remember meeting my mom in a hotel in Budapest in 1983?’ And now my brain’s really racing”.

“And at the end of it, he put, ‘By the way, you’re not my dad. I checked.’ When you get stuff like that, it’s sort of comedy gold, really. It’s quite a straightforward question, but it’s how you glue it together”.

Bruce Dickinson on the “Most rediculous trousers”

“I do take the Mickey out of, largely, myself”, he added.

“I have been guilty of wearing — unrepentantly, I should add — some of the most ridiculous trousers in the world. And it all makes good sense and it’s all in the best possible taste. And there’s a reason why I’m not invited to Paris Fashion Week”.

Dickinson’s book “What Does This Button Do?”, featured in the Top 10 New York Times “Harcover Nonfiction” best sellers list. It was released in the US in October 2017.

It was also the third book released by Dickinson. The book preceded “The Adventures Of Lord Iffy Boatrace” on English upper classes and “The Missionary Position”, on televangelism.