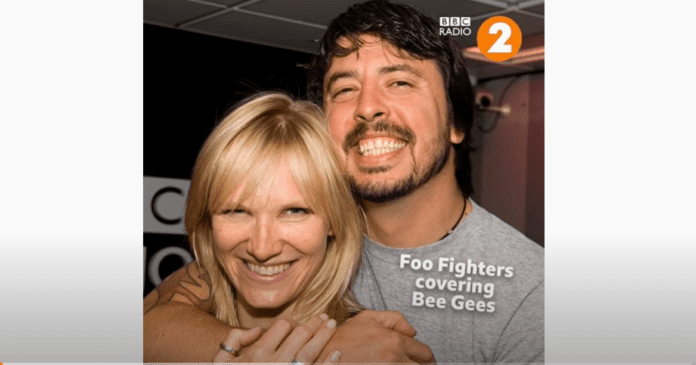 Foo Fighters have produced their cover of the Bee Gees classic disco track “You Should Be Dancing”.

The band shared their version of the track for Jo Whiley’s Sofa Session for BBC Radio 2. Check out a snippet of it here.

Elsewhere in the session, Foo Fighters played live versions of the 2002 hit, “All My Life” and “Waiting On A War” from their album “Medicine At Midnight” released earlier this month.

“Record a cover song for Jo”

On their cover of the Bee Gees’ track, Foo Fighters frontman Dave Grohl told Joe Whiley, “We’ve been going down to our studio every day and filming things and recording things, and this one day we had our list of things we were supposed to do and it said, ​’Record a cover song for Jo”.

He also added, “And while we were having this conversation somebody said, ​‘Hey, have you seen that Bee Gees documentary?’ And I was like the last person on earth, the only person that hadn’t seen it! So I was like, ​‘Why don’t we just do a Bee Gees song?’ And someone was just like, ​‘OK… how do you wanna do it?!’ And I said: ​‘Well, let’s do it like the Bee Gees”.

Foo Fighters’ frontman Grohl revealed that he has “never ever sung like that” in his “life”.

Grohl added, “We started recording the instrumental track, and then I thought, ​‘OK, well I’m gonna go out and sing it…’ and let me tell you: I have never, ever in my life sung like that, but it was the easiest song I have ever sung in my entire life!”.

This all comes after Foo Fighters’ drummer, Taylor Hawkins said that he was “blown to smithereens” the first time he heard the band before he joined them in 1997. He told NME that the band’s self titled album from 1995 had a huge impact on him.

The first track he heard was “This Is A Call”.  “I was completely blown to smithereens when I heard that” Hawkins said.