Home News Cyclist Lucky To Be Alive After Gang Attack By Teens At Grand... 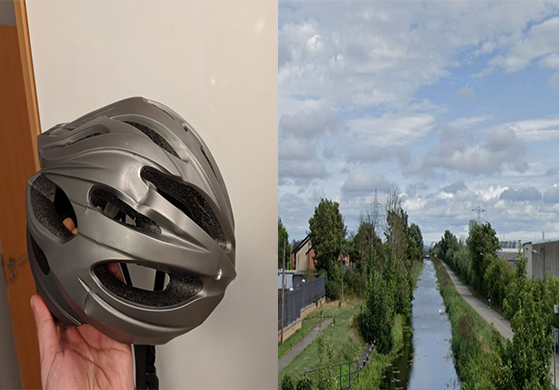 A cyclist has expressed his gratitude to be alive after a gang of teens attacked him. That was with metal rods on a cycle route located at Dublin’s Grand Canal.

The horrible ordeal occurred on Monday night at roughly 7.40pm beside the Bluebell community sports field.

If it wasn’t for the safety helmet he had on at the time, his injuries could have been a lot worse. According to reports, he walked away with a bust lip, lacerations and a bruised thigh muscle.

Sharing an image on Twitter, Yaman said he was “almost killed” by the gang, who ambushed him while he was squeezing through stile put there to stop dirt bikes using the track.

Yaman said: “I was almost killed by a gang of lads armed with metal rods on the Grand Canal cycle path, ambushed at a squeeze stile. They made off with my e-bike but not before beating me up. See dents on helmet below…”

I was almost killed by a gang of lads armed with metal rods on the Grand Canal cycle path, ambushed at a squeeze stile. They made off with my e-bike but not before beating me up. See dents on helmet below. @GrandCnlGrenway @IBIKEDublin @dublincycling @DubCityCouncil @IWAIreland pic.twitter.com/nvmYyDe4fT

After a  struggle for his bike, one of the teens ordered Yaman to hand over his phone. Yaman said that he had made it through the stile and began to get away which was difficult because of the injury to his leg. The teens gave up on him and cycled his bike away.

Other cyclists then reached out to Yaman on Twitter saying they had been attacked in the same spot on the bike track.

@maltanar I’m reaching out as the exact same events happened to me as I cycled home from work on Saturday evening. They ambushed me using a line of fire and surrounded me just before the Black Horse luas stop.They hit me with iron bars before I was rescued by a kind stranger 1/2 pic.twitter.com/qaDid3xxLC

Foo Fighters Relive 25 Year History In New ‘Times Like Those’...

Conor McGregor Called Out To Boxing Match With Luke Keeler