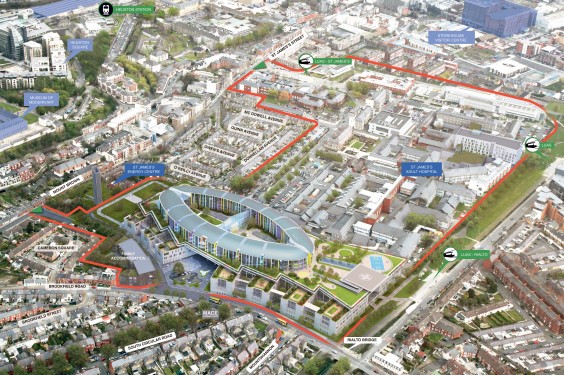 Lord Mayor of Dublin Mícheál Mac Donncha has written to the National Paediatric Hospital Development Board to call for the new national children’s hospital to be named after Dr. Kathleen Lynn, founder of St. Ultan’s Children’s Hospital and veteran of the 1916 Rising.

The Lord Mayor has sent a letter to the Board, signed by 57 of the 63 Dublin City Councillors. He said:

“The vast majority of members of Dublin City Council fully support the proposal that the new Children’s Hospital should be named after Dr. Kathleen Lynn.

“We are urging the Board to adopt this name in preference to the name currently being put forward, the Phoenix. This proposed name has been widely questioned already, given that another health facility in the City bears this name and also that there is a Phoenix Children’s Hospital in the USA.

“We believe that the most appropriate name for the new hospital should be in honour of Dr. Kathleen Lynn, a pioneering medical doctor who worked tirelessly for decades for the health and well-being of the children of Dublin and Ireland.

“Dr. Kathleen Lynn established St. Ultan’s Children’s Hospital to care for the children of the poor of Dublin. She and her dedicated co-workers undoubtedly saved the lives of thousands of children.

“Kathleen’s Lynn’s medical and social work was in line with her deep patriotism which saw her active during the 1913 Lockout and as chief medical officer of the Irish Citizen Army. In that capacity she served in the 1916 Rising in our City Hall, where she attended the dying ICA Captain Seán Connolly, one of the first casualties of the Rising.

“We believe that the name St. Ultan’s National Children’s Hospital would send out a signal that the new hospital is in the best traditions of Irish medical and social care, as well as honouring a great Irishwoman who continues to inspire today.”

The 57 Councillors signed the letter in City Hall, where Kathleen Lynn was stationed in 1916 including Mícheál Mac Donncha.