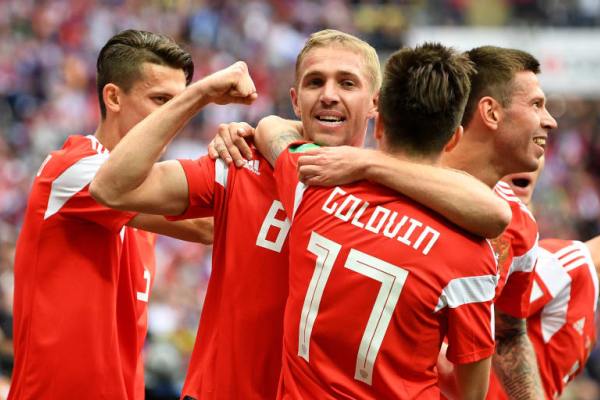 World cup hosts Russia are really off and running after a clinical 5-0 demolition of a desperately weak Saudi Arabia in their Group A opener in front of a delirious home crowd in Moscow.

Yury Gazinsky took 12 minutes to score the opening goal of the tournament before sub Denis Cheryshev added a second as the hosts led Saudi Arabia 2-0 at half-time at the Luzhniki Stadium.

Cheryshev replaced Alan Dzagoev who pulled up with a hamstring injury after just 22 minutes of action today.

Into the second half and another sub, the tall striker, Artemn Dzyuba scored a third, guiding his header past ‘keeper Al-Muaiouf, before Cheryshev’s stunning finish for four deep into injury time.

Not that deep though! Aleksandr Golovin’s free-kick added another couple in stoppage time.

Some very interesting stats from #RUSKSA.

For @TeamRussia, there's only one that matters.

”Sometimes it’s a source of joy for the fans, sometimes less so. However, we are honest in what we are doing. I was relaxed yesterday and I’m relaxed today because I know my players. It is a pleasure to work with them. Every coach depends on the players, this is why I am relaxed. Why do I have to be stressed?”

Man of the Match Denis Cheryshev was naturally delighted with his double strike:

“I could never have dreamt of anything like this. I already felt very happy just to be the squad. My second goal, we spent some time working on that during training sessions. I was trying to be up there with Dzyuba, he won it with a header and I just kicked the ball – I didn’t have time to think!”

Kellie Harrington’s Dad Calls For Whole Of Ireland To Get Behind...

Minister Confirms FAI Board To Step Down