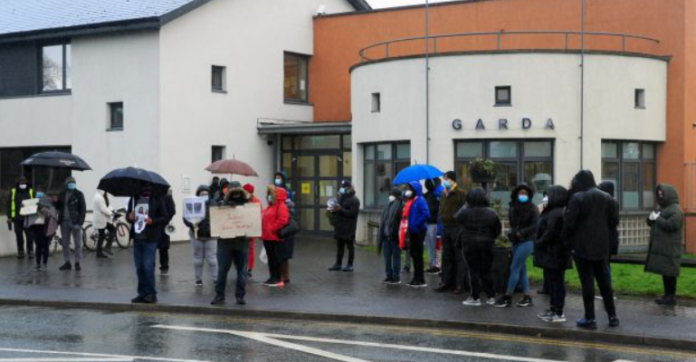 He was shot after after he assulted a shopworker in a nearby supermarket. Nkencho was armed with a kitchen knife. It has also been reported that Mr Nkencho had been suffering with mental health issues over the last number of months.

Huge protests against the shooting of Mr Nkencho continued on Tuesday outside Blanchestown Garda Station. Former TD, Ruth Coppinger made a speech infront of around 70 people. The protestors have vowed to continue their campaign outside the station.

A pastor at Christ Apostolic Church, Dr Adewale Kuyebi urged the protestors to, “let our voice be heard”, adding “We must come together”.

He continued, “People are angry. The youth are very, very angry”.

He also said, “We as parents and leaders want to make our actions now constructive”.

The Garda Ombudsman Commission are investigating George Nkencho’s death. Family members have yet to make a statement.

The family were due to meet the Garda Ombudsman today, but that meeting has been postponed. It was reported that they are seeking a second, independant autopsy on the body’s remains.

This “hate mail” was a handwritten letter sent to the Nkencho family on Tuesday. The letter contained racial slurs and states the sender is “glad” that Mr Nkencho is dead.

This comes after false claims had circulated across social media since the shooting, that Mr Nkencho had several previous criminal convictions.

The letter also tells the family to get out of the country, along with the racial slurs.

Mr Nkencho had moved to Ireland with his family when he was 7.

The letter had been passed on to Gardaí in Blanchestown. It is understood that it will be investigated under harrassment and threatening behaviour legislation.

The letter is also to be examined for fingerprints. The postmark will also be analysed for clues about its provenance.

A Garda spokesperson said, “An Garda Síochána is investigating the origination and contents of correspondence which has been brought to our attention”.

Vigils Held Across Ireland To Mourn The Tragic Loss of Young...