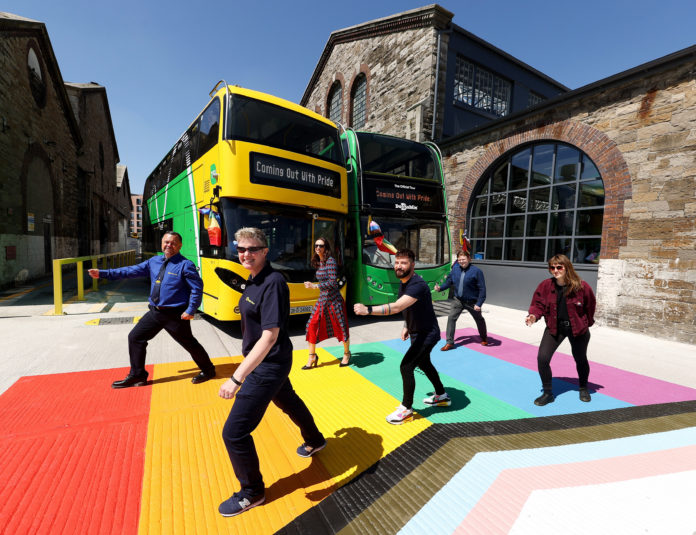 The stories of coming out as LGBT in Dublin will be printed on the side of city buses from this weekend, as Dublin Bus launches its Pride campaign.

The “Coming Out With…” initiative hits buses on routes across the Capital this Friday morning, and a special video to be released on Dublin Bus social channels this coming Saturday.

With no Pride Parade in the city again this year, Dublin Bus, DoDublin sightseeing and attractions and GCN have worked together to create the ‘Coming Out With …’ outdoor ad campaign and as part of its continued support of the LGBTQ+ community and employees.

The campaign will see a special group of people who call Dublin their home, revealing their true selves on advertisements on the side of buses across the city, with the chance to read more about their personal stories on GCN.ie.

Speaking about the campaign, Vivienne Kavanagh, Dublin Bus Employee Development & Equality Executive said: “For over 10 years Dublin Bus has worked to champion the community and play our part for LGBTQ+ causes. We’re really looking forward to bringing this celebration of Diversity and Inclusion to the streets and help the newest members of the community celebrate this milestone and tell their story with GCN. As a company we take great pride in our progressive and pioneering D&I policies, and want to ensure all employees and customers feel welcomed and supported.”

Curators of queer Irish culture, GCN is Ireland’s only dedicated national LGBTQ+ press. It has been a vital, free-of-charge information service for Ireland’s LGBTQ+ community since 1988, just a year younger than Dublin Bus whose employees have been getting Dubliners to where they need to be since 1987.

In 2018 and 2019 Dublin Bus helped ‘Proud Dads’ and older members of the LGBTQ+ community to come together and enjoy Pride. The resulting heart-warming videos were seen hundreds of thousands of times across the globe.

The Coming Out With Dublin Bus X DoDublin X GCN campaign will be seen on routes throughout the city from Friday 25 June, featuring on eye-catching advertisements across 100 buses and 70 six sheets at stops across the Capital.

Meanwhile, the City Council is continuing to install rainbow pedestrian crossings around the city, including a new pride crossing on Dame Street.