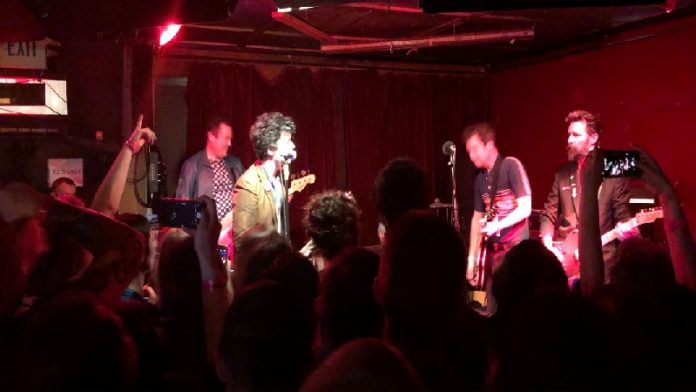 This time, they were billed as The Coverups, and the band’s mission was to solely perform the music of other artists ranging from The Replacements to David Bowie to Tom Petty.

It was the third show for the band, whom had previously played two equally tiny gigs in January of this year and most recently at the Ivy Room in Albany, California.

The Coverups went on late in the sweaty venue and unleashed a version of The Replacements’ ‘Color Me Impressed.’

They then played 90 minutes of covers from various decades and genres. There was a powerful rendition of Rick Springfield’s ‘Jessie’s Girl‘ and two back-to-back Bowie covers, ‘Ziggy Stardust‘ and ‘Suffragette City.’

While Green Day drummer Tre Cool is not an actual member Armstrong called him to take over on drums midway through the set to help out on a cover of The Ramones ‘Sheena is a Punk Rocker’.

Armstrong received a stick on joke moustache from a fan and almost kept it on his lip for the entirety of ‘I Wanna Be Sedated‘ by The Ramones.

According to Rolling Stone’s Zack Ruskin: “Dirnt jokingly barked ‘No requests!’ any time someone tried to entice them to deviate into a Green Day track.

“The catalogue of The Coverups other band was not to be touched, and for good reason. This wasn’t a Green Day show, although the energy and excitement had all the hallmarks that have come to define the groups live performances.”