Home News Greta The Great Is TIME Person Of The Year 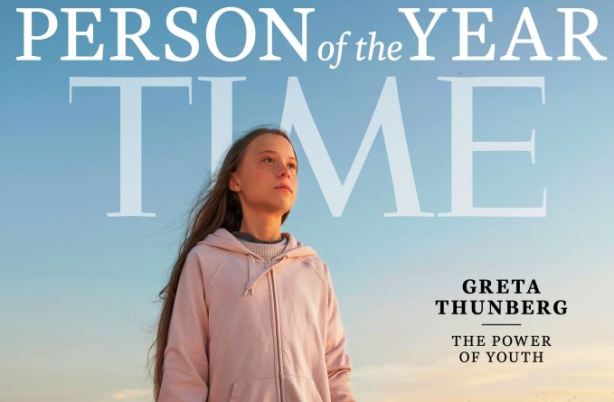 The 16-year-old climate activist Greta Thunberg is TIME‘s 2019 Person of the Year and the magazine’s youngest choice for the prestigious title. The Swedish teen became a global conscience for climate change and environmental activism.

Thunberg has quickly become one of the world’s most notable and youngest climate change activists, sparking a collective movement to fight climate change after protesting alone outside the Swedish parliament during school hours on Fridays when she was 15.

The teen held up a now universally recognized hand-painted sign that read “skolstrejk för klimatet,” which translates to “School strike for the Climate.”

Thunberg’s initiative to strike, galvanized hundreds of students to protest for climate justice throughout Europe and that momentum quickly fanned across the globe becoming the “Fridays For Future” movement.

Why TIME chose @GretaThunberg as the 2019 Person of the Year #TIMEPOY https://t.co/ItgifjkBgh

Her no-nonsense style made her a force that could not be ignored by world leaders and she was asked to speak in front of several high-profile entities including the United Nations and the United States Congress.

Thunberg, who was diagnosed with Asperger’s syndrome at a young age, heard about climate change at 8 years old and said she became instantly concerned to the point that she plunged into depression over it.

“I remember thinking that it was very strange that humans that are an animal species, among others, could be capable of changing the Earth’s climate,” she said during a 2018 Ted Talk. She gave up eating meat and traveling via airplane, among other things, to reduce her carbon footprint.

The young activist sailed for just over two weeks on a zero-emission boat with her father in August to attend the U.N. Climate Action Summit in New York City and to meet with various politicians.

“She seems like a very happy young girl looking forward to a bright and wonderful future. So nice to see!” Trump commented after retweeting a video of Thunberg’s speech. Despite being a frequent target of criticism, Thunberg has trudged forward on her quest for environmental justice.

Earlier this year, Thunberg, along with 15 other young climate activists, filed a legal complaint with the United Nations against five countries under the UN Convention on the Rights of the Child alleging the nations are not doing enough to combat climate change and that their inaction is affecting their right to thrive.

Her efforts also earned her a nomination for the 2019 Nobel Peace Prize. While the teen lost the award to Ethiopian Prime Minister Abiy Ahmed Ali, she remains one of the youngest nominees for the illustrious prize.