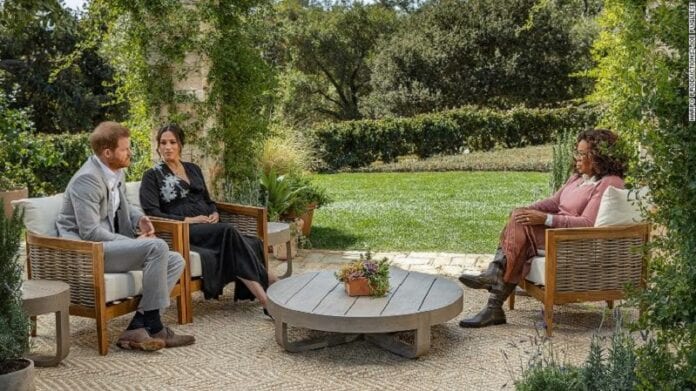 Harry and Meghan’s interview with Oprah Winfrey will air on Irish TV tomorrow.

It has been announced that RTÉ 2 will air the two hour interview at 9:30 on Monday night.

Earlier this week, it was announced that ITV won the rights to screen the interview in the UK, in a deal said to be worth around €1.16 million. This means that Irish viewers will have two options to watch the interview.

The two-hour interview will be shown to Irish viewers on UTV at 9pm on Monday, at the same time it will broadcast on its sister station in the UK.

The interview has been making headlines around the world even before airing. A trailer has been released and you can watch it below.

Harry’s grandfather, Prince Philip has been in hospital for two weeks which has caused some people to question the timing of airing the interview.

“The timing is just horrendous. Anybody who looks at this through the optics of a caring family, even a family who are estranged from one another, it’s very uncomfortable as you edge towards Sunday.”

Several UK newspaper have revealed that the Queen will not watch the interview as she is turning her focus towards “national issues.”

This interview has been compared to Princess Diana’s interview with Martin Bashir. Comments from Harry released in another clip only added to this comparison.

“I’m just really relieved and happy to be sitting here talking to you with my wife by my side. Because I can’t begin to imagine what it must have been like for her (Diana), going through this process by herself all those years ago.”

Harry and Meghan’s interview with Oprah has left many people curious. What happens inside Buckingham Palace, usually stays there.

Now, that the couple have relinquished their royal titles and privileges, they are no longer bound to Buckingham Palace protocol and the interview should make for fascinating viewing.

Last year, Netflix’s series ‘The Crown’ had people glued to their screens. UK politicians had called on the streaming giant to place a fiction disclaimer before each episode but the calls fell on deaf ears.