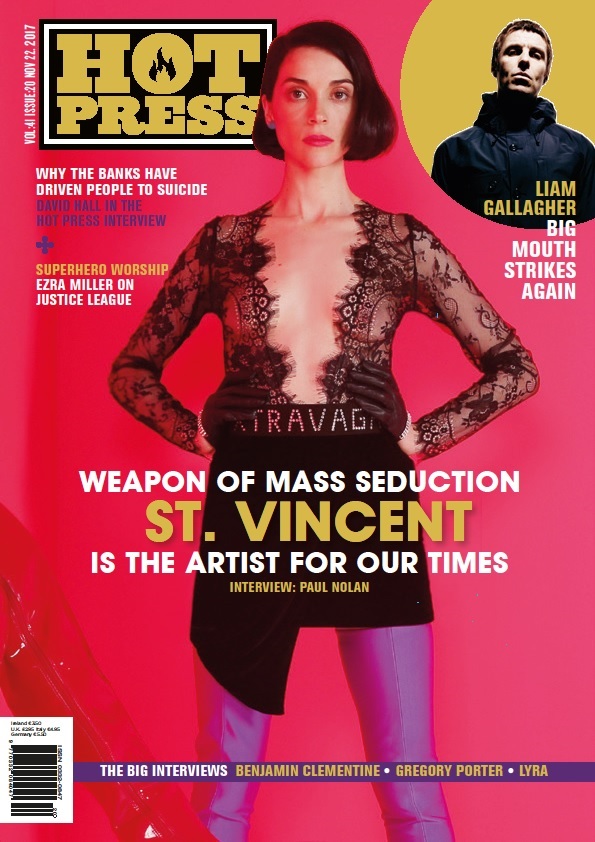 In a fiercely outspoken Hot Press Interview, David Hall – the man behind iCare and interim CEO of Console in the aftermath of the financial scandal at the charity – has said that he would like to run for the Presidency. But he is full of praise for President Michael D. Higgins.

He also warns that we may see mass protests on a par with the water charges if vulture funds get their hands on family homes. And he accuses the government of having ‘no balls’ when it comes to dealing with the banks.

In a no-holds-barred interview in the new issue of Hot Press, David also sensationally claims that the banks have blood on their hands, saying that he believes at least 200 people having taken their own lives because of the appalling behaviour of our banks.

David tells Hot Press’ senior editor, Jason O’Toole, that he now fears there will be a dramatic increase in the number of family homes being repossessed next year – insisting that some 17,000 repossession orders before the courts show the ‘banks intent is clear’.  And he outlines his new plans to help families that are in dire straits – and how he hopes to fund his ambitious project moving forward.

During what is a hugely revealing Hot Press interview,  David also discusses his thoughts on the 8th Amendment – revealing that as Vice President of the students union in University College Maynooth he helped women get terminations abroad. He also discusses his own personal need for IVF in order to start his own family.

Other topics on the table include David talking about the time he was blackmailed, and asserting his belief that the banks tried to sabotage and dig up dirt on him.

Below are snippets from the David Hall interview with Hot Press in his own words:

On the possibility of running again for the Dail, David says, “I’d consider it. I would consider the Seanad.”

On his belief there’ll be rioting on the streets and civil disobedience if the vulture funds start kicking people out of their homes, David says, “Yes. I think we could see a tipping point from the public that could replicate the water protests.”

On Console’s disgraced CEO Paul Kelly and the possibility of a prison sentence, David says, “He won’t, but I do believe he should. Unfortunately, the law needs to change. The bar for fraud is a very high bar to prove. When you have your wife and others on a board that you control, you can hide behind them approving expenditure – and that’s what I believe will happen in this case. I’ve not said that publicly before, but that’s what I think: there will be no criminal sanctions here.”

On people trying to dig up dirt on him, David says, “I know people went looking to dig up dirt on me. Politics is a nasty, nasty business. Politicians who affect change, I find, always become the subject of some smear, rumour or campaign. Once you start taking on the establishment, once you start costing them money, a different level of attention is put upon you by these bodies.”

On helping women get abortions abroad, he says: “Did I advise or help people go abroad for an abortion? Yes. I’ve never been asked the question. You’re the first person who’s ever asked me. I’ll answer questions honestly, irrespective of who’s asking them. I’m not designed for politics in the sense that I’m not designed to avoid the question. I’ll never tell you who they are, but yes, I did so (despite being) in a massively Catholic ethos.”

Snow Likely As Siberian Winds On The Way