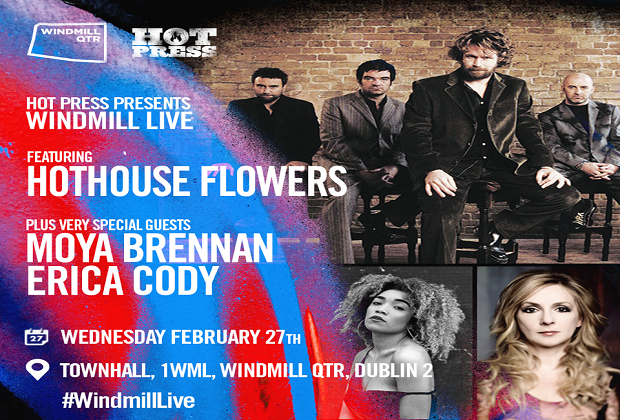 An excellent feast of live music is coming to the Windmill Quarter. As part of new initiative to celebrate the legacy of Windmill Lane Studios, the iconic Dublin location of the Windmill Quarter will play host to a series of free concerts from new and established Irish talent, curated by Hot Press.

As a celebration of the rich legacy of Windmill Lane Studio, the first of a planned series of Windmill Live concerts, curated by Hot Press, takes place on Wednesday 27 February, with the legendary Irish heroes Hothouse Flowers headlining.

In what promises to be a unique and wonderful collaboration, Hothouse Flowers will be joined onstage by special guest, the Emmy-award winning Moya Brennan of Clannad, during the course of an intimate, free gig.

They will also be supported by upcoming soul/R’n’B singer-songwriter, Erica Cody, who is one of the stars of the RTÉ Concert Orchestra’s ‘The Story of Hip Hop’ – and was chosed as part of Hot Press’ ‘Hot For 2019’ list at the start of the year. Both the Flowers and Clannad used Windmill Lane Studios extensively for recording or mixing purposes.

The gig will see Moya Brennan and Hothouse Flowers vocalist Liam Ó Maonlaí duet on ‘In A Lifetime’,  a song that was originally recorded with Bono of U2 sharing vocal duties. Written by Ciarán and Pól Brennan, the track was released on Clannad’s 1985 album, Macalla, and was a Top 20 single in Ireland, Holland and the UK.

Windmill Lane Studios has a fascinating place in Irish musical history. As the place where U2’s crucial first three albums – Boy, October and War – were recorded in full, it became synonymous with top Irish artists. The band also did much of the vital work on The Unforgettable Fire and The Joshua Tree there.

The original Windmill Lane Studios was launched in 1978 and is widely regarded as central to the development of an internationally successful music culture in Ireland. It was also the recording location for albums by a string of international best-selling artists, including Clannad, Van Morrison, The Waterboys, Def Leppard and Kate Bush, among many more.

Applications for tickets to attend the first of these exclusive concerts will open on Wednesday 20th February. Go to hotpress.com/WindmillLive for further details.