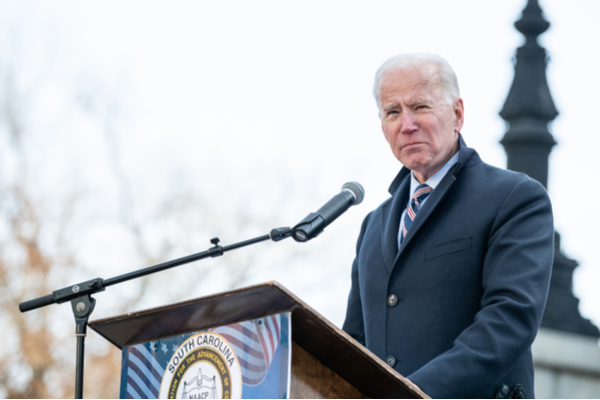 US President Joe Biden was caught swearing at a reporter during a news conference.

This meeting took place at the White House Competition Council. The president’s mic seemed to accidentally pick up his reaction to a question.

This happened after Fox News’ White House Correspondent Peter Doocy had asked Mr Biden, “Will you take questions on inflation then? Do you think inflation is a political liability ahead of the midterms?”.

After this questions was asked, voices in the background can be heard saying “no thank you”.

It was put to President Biden who responded without realising that his mic was still turned on.

“That’s a great asset – more inflation. What a stupid son of a b****,” the president can be heard saying.

Quickly realising his mistake, the mic of an understandably stunned Joe Biden was quickly switched off. Following this, The White House did insist that they are striving to ease inflation, which is currently at a 40 year high in America.

“did you hear what the president (Biden) said?”

Speaking to Fox News later, Mr Doocy revealed that he did not realise what the President had said when the conference finished.

“I couldn’t even hear him because people were shouting at us to get out but somebody came up to me a few minutes later in the briefing room and said, ‘did you hear what the president said?”, he said.

He joked, “The White House and the communications officials here had been signalling last week when they had their first year in office anniversary that they were going to take a different approach with reporters”.

“We thought that meant after he did a two-hour press conference, he was just going to be available for Q&As more often but maybe it’s more stuff like this”.

Mr Doocy later told the Hannity Programme that Mr Biden had phoned him to “clear the air”.

President Joe Biden was inaugurated as US President last year, following victory over Donald Trump. Earlier this month, Trump supporters were blasted by the Offspring’s Kevin “Noodles” Wasserman who criticised them for believing conspiracy theories regarding the Capitol Riots. More on that here.

Madcap Belarusian Dictator Says People Will Have To Kill Him To...

The First Case of Monkeypox Has Been Identified In The Republic.