Home Entertainment News Joe Exotic Complains He Was Too Innocent And Too Gay To Be... 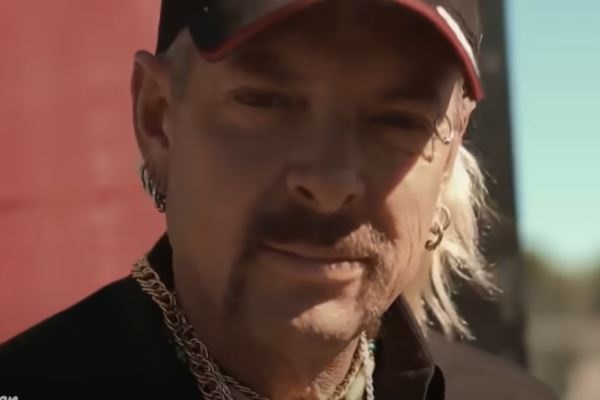 Joe Exotic has hit out at Donald Trump’s failure to pardon him before leaving office, suggesting that he was “too innocent and too GAY” to be pardoned. The Tiger King star had expected to be one of the almost 150 names pardoned by Trump in his final hours as President and desperately hoped to be granted clemency.

Joseph Maldonado-Passage, as he is legally known, is currently serving a 22-year jail sentence for animal cruelty, and plotting to kill his rival Carole Baskin, yet was still hopeful of a release. In fact, Joe was so confident of his release, his legal team had arranged for a limousine to pick him up from jail.

Joe missed out on a pardon as almost 150 others are more lucky. Co-founder of Death Row Records, Michael “Harry-O” Harris was one of those names. Harris has served more than thirty years behind bars for attempted murder and trafficking of cocaine.

However, Joe never made it to his limousine as he was not among the 143 names released on Wednesday morning. The former zoo keeper responded to the disappointment by posting on his social media account; “I was too innocent and too GAY to deserve a Pardon from Trump.” The 57 year-old also took aim at the former president’s son, Don Jr, who reportedly met with Exotic’s legal team to discuss his potential acquittal.

“I only mattered to Don Jr. when he needed to make a comment about me to boost his social media post,” claimed Joe, the former Netflix favourite. “Boy were we all stupid to believe he actually stood for Equal Justice? His corrupt friends all come first.”

Upon his application for pardoning back in September, Exotic’s lawyers put forward the argument that Joe was “railroaded and betrayed” by others. His legal team also said in the application that “he will likely die in prison” because of health concerns, with his release scheduled for 2037.

Meanwhile, Exotic’s nemesis Carole Baskin, 59, was thankful that her former enemy would stay behind bars. She wrote on social media: “I am thankful that Joe Schreibvogel Maldonado Passage was not granted a pardon.”

According to Baskin, she received notice from the prison system stating Joe has had an extra month added to his sentence for not obeying prison rules. Baskin also suggested he should give evidence in order to take years off his sentence, following the lead of another Tiger King star, Mario Tabraue.

Russian Subscribers Lose Access To Netflix Over War On Ukraine