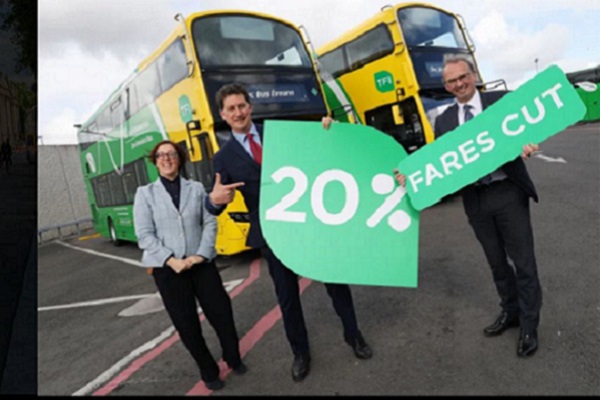 Green Party leader Eamon Ryan confirmed that public transport costs in Dublin will be cut by 20% from today. Half price fares will also kick in for young people.

Along side the National Transport Authority, Minister Ryan said that the cut in public transport costs, including half prices for adults aged between 19 and 23 will also apply to all subsidised public transport across Dublin.

There will also be a 20% price cut for Riders fares. This includes when you pay for fares for their journeys via Leap card, online or cash payment. For those holding a Student Leap Card, no action is also required.

It was also confirmed that non student young adults seeking the lower fees, will need to apply for a Young Adult Leap Card.

When the extra 20% cut on all public transport which was announced by the government last February as part of their supports for living supports is applied, the costs of public transport for young adults will be 60% cheaper until the end of 2022.

#ToBeFair, we all deserve our fair share of good news. With a 20% fare reduction on #PublicTransport (50% on student and young adult fares), it's never been a better time to hop on!

Speaking on these reductions, Transport minister Eamon Ryan said that these measures are all about “supporting young people”.

“When I announced a permanent 50 per cent fare reduction for young adults in Budget 2022″, Minister Ryan said. “I wanted to go some way to supporting young people, by making day-to-day life a little bit more affordable”.

“This fare cut is unprecedented and quite radical. But I believe  it’s the way we need to go”.

CEO for NTA Anne Graham also added that the number of young people opting to use public transport has increased since the measures took shape.

“With these fare reductions, we look forward to seeing more people using public transport to get to work or college or even to get out and about with their friends and family”, she said.

“In the first three weeks of the 20 per cent discount being available on Bus Éireann services, passenger journeys have climbed by nearly 10 per cent in the regional cities, with Galway and Limerick now ahead of pre-Covid levels”.

Mr Ryan also spoke about the Government’s approach to the housing crisis last May.

Gardaí May Have Foiled A Gangland Killing In Dublin