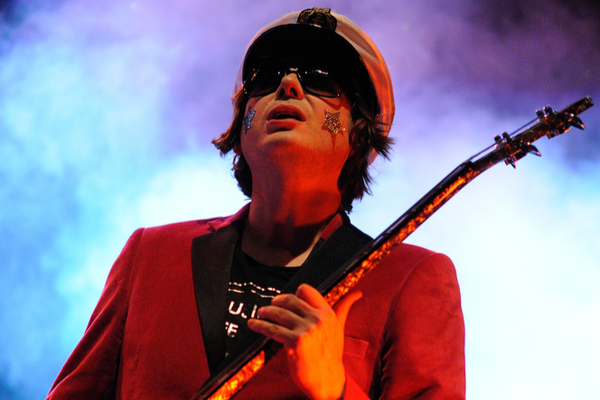 Wire made the comments back in 1993, saying that he hoped Stipe would “go the same way as Freddie Mercury”.

He has also claimed that alcohol has often “altered” his personality.

Wire has “No excuses”

Along with admitting that there are “no excuses”, Wire also told MOJO Magazine,”It is strange, because I’m not lying when I talk about my shyness when I was young”.

“I’m always dubious about people who say they have no regrets”, he continued. “I have millions. I deeply regret some mad things, just awful things I said. Spiteful things”.

He also added, “And I haven’t got any excuse. Sometimes I was absolutely hammered on Babycham and vodka. You do forget how much drink can alter you”.

Wire also revealed that he has not had a drink in 11 years.

“I haven’t had a drink for 11 years”, he explained. “Not a big crisis or anything, just, ‘I’ve got kids and I can’t get up in the morning any more”.

On his kids, Wire has also said that his much maligned comments about Michael Stipe have come back to haunt him when it comes to being a figure of authority over his children.

Wire also said in the same interview that he would rather “f*****g stab my own eyes out with a pencil” than accept an OBE or Knighthood from the British Monarchy.

He also had a pop at “left-leaning actors and pop stars” for “queuing up” to accept such honours.

Back in May, Wire’s band Manic Street Preachers also released the single “Orwellian” which will feature on their upcoming album “The Ultra Vivid Lament” which will arrive on September 3.

“Musically, it echoes ABBA, the majesty of Alan Rankine’s playing in The Associates and Talk Talk’s ‘It’s My Life’ with a Lindsey Buckingham, ex Fleetwood Mac, guitar solo”, the band’s frontman James Dean Bradfield said of the new track.

Check the lyric video out for yourselves, along with Nova’s report here.

New Paul McCartney Book The Lyrics Is Out Now!