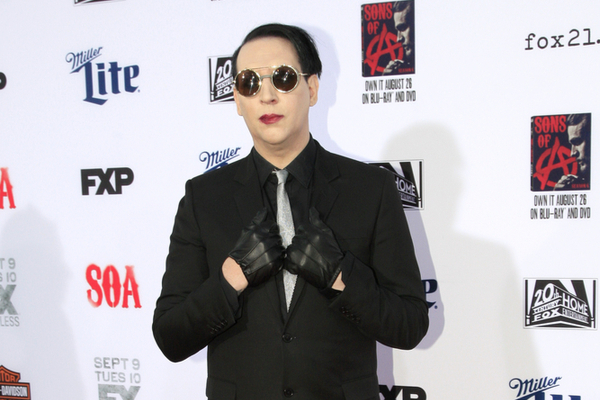 Marilyn Manson has turned himself into police custody for an alleged spitting incident that occurred back in 2019.

New Hampshire police put out a warrant for the arrest of the 52-year-old rocker back in May after he allegedly spat at a woman before blowing his nose “at her” during an altercation at the Bank of New Hampshire Pavilion in August of 2019.

According the TMZ, Manson turned himself in to law enforcement last week who book the star briefly before releasing him shortly thereafter. Manson was released on personal recognizance bail on the conditions that he wouldn’t commit any crimes while released, wouldn’t have any contact with the alleged victim, and that he would appear to all of his subsequent court dates.

A warrant for Manson’s arrest was issued two months ago by Guilford Police Department who noted that the hitmaker was wanted on two counts of misdemeanor simple assault.

“Mr. Warner, his Agent and legal counsel have been aware of the warrant for some time and no effort has been made by him to return to New Hampshire to answer the pending charges. The videographer had been subcontracted by a NH-based company to video the concert, and had been located in the stage pit area when the alleged assaults occurred,” read a statement from the Guilford Police Department.

Shortly after the warrant was issued several eyewitnesses came forward with allegations that Manson had been “spitting everywhere” during the incident before targeting the victim after she “looked semi-irritated”.

“He was spitting everywhere and one time it got on her camera so she wiped it off and looked semi-irritated. He noticed this and kept purposely spitting on her camera. I think her final straw is he got on the floor, got within 2-3 feet of her and hacked a giant snot rocket at her not the camera. She was pissed off and disgusted so she stormed off and he just laughed.

“I stopped listening to his music after that and told my husband I would never go to another one of his concerts again.”

Another concert goer alleged that Manson “laughed” about the entire incident.

“[He] bent down to shoot his snot all over this woman. I can remember him just laughing about what he did,” they added.