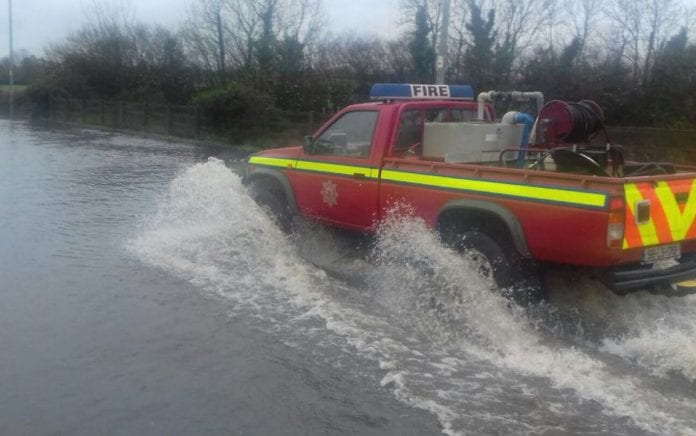 Met Éireann has warned that temperatures are expected to reach -2 degrees at the weekend. They also warned of rain and possible flooding around the coast.

However, they did say that today is expected to remain dry, with occasional showers to spread across the country in the afternoon. Temperatures are to stay between 8 and 11 degrees.

Met Éireann stated, “Dry in most areas this morning with patches of drizzle, mist and fog”.

“Some bright or sunny spells will develop this morning and rain over Ulster will gradually clear northeastwards”.

“Cloud will thicken in the southwest through the morning ahead of further rain developing in the morning which will spread up over the country through the afternoon and evening with freshening southerly winds and followed by scattered showers”.

“Highest temperatures of 8 to 11 degrees.”

Regarding tonight, Met Eireann have said that westerly winds will reach between gale force 8 or strong gale force 9 along coastal waters from Carnsore Point to Mizen Head to Slyne Head.

Outbreaks of rain are also likely. It is expected to become dry towards the morning with scattered showers.

Met Éireann has also said that Friday is to begin mostly cloudy. Scattered showers are to also be expected, but will become more isolated as the day progresses. Sunny spells are also expected over the day. Temperatures are to hit highs of 10 degrees.

They also added, “A mostly cloudy start tomorrow morning, with scattered outbreaks of rain, becoming more isolated through the morning with some sunny spells developing”.

Regarding the rest of Friday, Met Éireann said the following, “Highest temperatures of 6 to 10 degrees, coolest in the north”.

They continued, “Westerly winds will ease light to moderate before backing southeasterly and freshening as heavy and persistent rain moves in to the southwest later in the afternoon”.

Met Éireann said that the weather outlook for the weekend is “mostly unsettled”.

Sunday night temperatures are expected to be -2 degrees.

Met Éireann on the potential of flood:

It looks like rain will extend over the country on Friday night. Heavy showers are to hit southern coasts bringing the “risk of spot flooding”.

Temperatures are to be between 1 and 5 degrees with the southern coast to experience warmer weather.

The national forcaster stated, “Rain in the southwest will extend over much of the country though some northern areas holding mostly dry”.

They also added, “Lowest temperatures of 1 to 5 degrees generally, coolest in north, but a degree or two warmer along southern coasts where the rain will be heaviest with a risk of spot flooding”.

“Easterly winds will be fresh to strong and gusty”.

Mother And Baby Home Survivors To Be Allowed Access To Their...