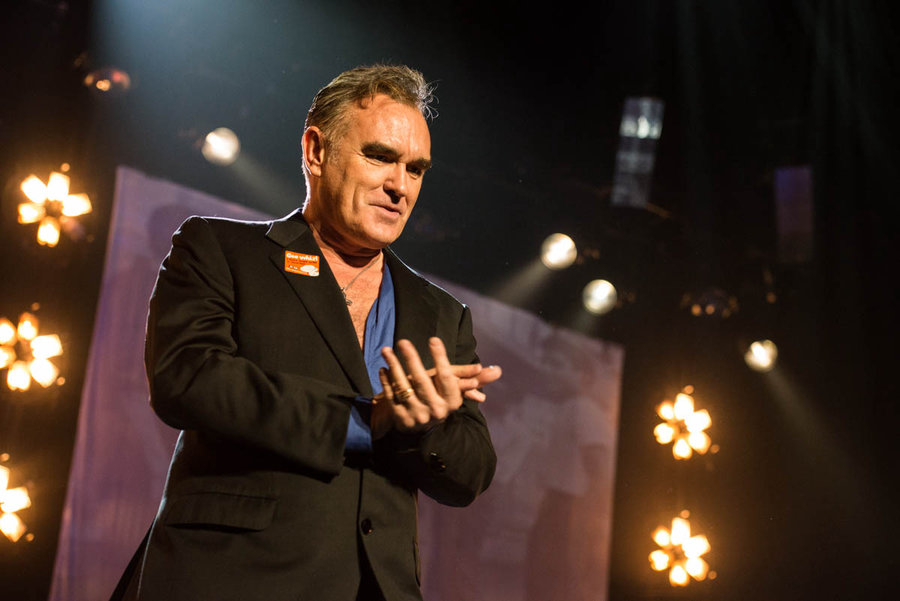 Morrissey has responded for the first time after he was criticised when he was pictured wearing a ‘For Britain’ badge during a US TV appearance.

For Britain are an extremist-fringe right-wing political party in the UK. Last fortnight, while performing on the Tonight Show, Morrissey wore the small For Britain pin.

The NME also reports that over the weekend posters advertising his new covers record have been taken down from Liverpool’s Merseyrail after a public complaint was made. Morrissey has now come out in response to fans and critics on his site MorriseyCentral.com.

After offering his thanks to BBC Radio 2 for supporting his music, Mozza then went on a rant accusing the media of being “vengeful and paranoid”.

The Moz wrote: “In early old age could I please express very sincere thanks to BBC Radio 2 for their broad-shouldered support given to ‘California Son’, ‘Wedding Bell Blues’ and ‘It’s Over. Whatever the future brings, I will always remember Radio 2’s steady support during these rocky weeks – especially from Jo Whiley.”

Following the pleasantries Morrissey began to outline his position:

“I am sorry the UK print media’s contorted interpretation of who and what I am has gone all wrong. In these days when most people are afraid to even whisper, the print media write as if someone is coming to get them. This aching nervousness brings on the vengeful and paranoid.”

His assault on the press continued citing issues of free speech and the media’s desire to adopt an apocalyptic narrative in its reportage:

“Inventing Britain’s doomsday is the preoccupation of the tabloids, and they can hate you for having lived. I straighten up, and my position is one of hope. The march backwards is over, and life has begun again.”

The singer added: “‘No’ to Soviet Britain; prayers not to gods but to forces; an end to disingenuous media cluelessness; the people have the power; hatred and beheadings belong in the furnace of history; music might still be your only friend; for every shade and persuasion … ”

With regard to addressing any implied xenophobic leanings, Morrissey offered his thoughts:

“We shall always be alongside each other – everyone’s culture of value; no more fashionable outrage; cows are friends to humans – don’t kill them; beware of those who write in headlines; moral fiber means holding on … to your friends; give up on inferior arguments; God gave you your life to enjoy – you will cry for your life in years to come.”

Mozza concludes: “Death always answers back; do not be a nobody; you have survived this far in order to make the remainder peaceful and funny; your very survival proves that you have a right; ignore the cold eyes of fascism; your life is Art.”

Morrissey first offered public support of For Britain back in 2018, when he was interviewed on the blogging site Tremr. He sparked more controversy when he referred to Hitler as ‘left wing’. After being blasted by fans for supporting English Defence League Founder Tommy Robinson, he later rescinded.

The NME reports that in a statement at the time he said he “despised racism and fascism” and came out in support for Muslims.

Slash to play in UK sometime this year