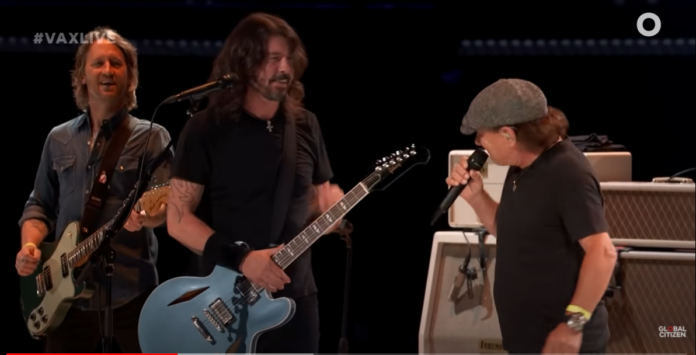 AC/DC’s Brian Johnson teamed up with Foo Fighters for a live cover of “Back In Black”. They covered the track at Global Citizen’s Vax Live Concert. You can check out that collaboration below.

Johnson covered the track along with Dave Grohl and co at the So-Fi Stadium in LA on May 2. The event streamed online over the weekend.

Footage had been intially posted by a fan of this Johnson/Foos cover, but now official video footage is available. Johnson can also be seen on vocal duties for the 80s track.

This was also part of the Foo Fighters’ performance of 6 tracks infront of 27,000 people at non-socially distant event, encouraging people to take the Covid-19 vaccine when offered.

Other tracks that were also played included “Times Like These” and “Everlong”.

This Vax Live event was hosted by singer Selena Gomez and was put together to “to help end COVID-19 for all, end the hunger crisis, resume learning everywhere, protect the planet, and advance equity for all”.

Johnson was told Back In Black “would never fly”

Recently, Brian Johnson himself was also told that “Back In Black” would “never fly”. Johnson was told by a former band mate from Geordie that he and AC/DC would not work.

Back In Black went on to subsequently be certified platinum 25 times by the RIAA and sell 25 million copies in the US. More on that here.

Regarding the track itself, AC/DC’s Angus Young also had to deny that former AC/DC frontman Bon Scott helped to write the track.

Scott passed away in 1980 and was replaced by Johnson.

Angus Young said this,“At the time, me and (founding AC/DC rhythm guitarist) Malcolm (Young) were writing songs, which became the songs for Back In Black”.