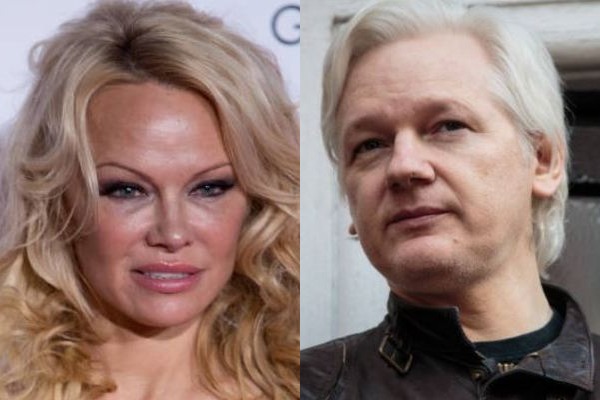 WikiLeaks founder Julian Assange “deserves our support” according to the Baywatch star Pamela Anderson who visited him at the London prison where he is jailed for breaching bail conditions.

Assange was sentenced to 50 weeks in prison for skipping bail in 2012, when he sought asylum at the Ecuadorian Embassy in London to avoid extradition to Sweden, where he was wanted on sexual assault allegations. He was arrested at the embassy in mid-April.

Anderson, best known for starring in the long-running TV show Baywatch, struck up a friendship with Assange and visited him a number of times at the Ecuadorian Embassy.

Pamela Anderson was a guest of Belmarsh Prison in south-east London, after visiting the  WikiLeaks founder.

“It is going to be a long fight,” a visibly emotional Anderson told reporters outside the Belmarsh prison in London. “He deserves our support, he needs our support.”

“He deserved our support because he has sacrificed so much to bring the truth out and we deserve the truth. That is all I can say. I am sorry, I feel sick, I feel nauseous. We are here to save his life, that is what this is.”

“Julian Assange is the world’s most innocent man.”

WikiLeaks editor-in-chief Kristinn Hrafnsson also addressed reporters, saying that Assange “knows that he is innocent” and is “bent but not broken.”

Assange appeared in court on charges of jumping British bail seven years ago, in London on May 1st. “He knows that he is being persecuted for the simple fact of doing journalist work,” Hrafnsson said.

Speculation as to the circumstances of Assange’s dramatic arrest in London last month has continued to swirl.

The president of Ecuador, Lenin Maduro, said Assange was ejected from the embassy after using it as a “center for spying” and acted “discourteous and aggressive” toward staff. Both Assange and WikiLeaks deny these claims.

Federal prosecutors in the United States unsealed a computer hacking indictment against Assange just hours after authorities in the United Kingdom arrested him, accusing Assange of a conspiracy with former U.S.

Army intelligence analyst-turned-whistleblower Chelsea Manning to hack into U.S. Department of Defense computers in March 2010, “one of the largest compromises of classified information in the history of the United States,” according to U.S. officials.

A lengthy legal battle is expected to take place after Assange told a London court via videolink that he would contest extradition to the U.S., according to The Associated Press.

NEW: Actress Pamela Anderson spoke to reporters after visiting WikiLeaks founder Julian Assange at a London prison, calling him an “innocent man” who “sacrificed so much to bring the truth out” and questioning his prison conditions. https://t.co/lKfwFlAebi pic.twitter.com/rHYPwl6qIF

33 Year Old Man Stabbed To Death At House In Wexford