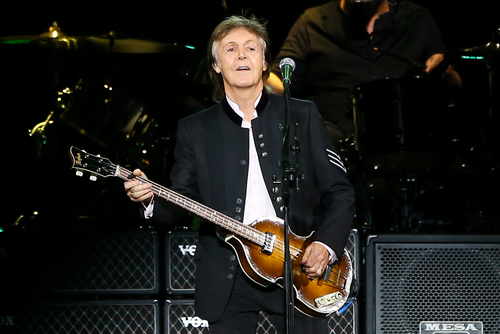 Paul McCartney has revealed his appreciation for Bob Dylan by saying he wishes he “was a bit more like” him.

McCartney was talking to Uncut magazine as he features on their front cover this month. The former Beatle was asked for his opinion on Dylan’s latest album, ‘Rough and Rowdy Ways’.

“I always like what he does. Sometimes I wish I was a bit more like Bob. He’s legendary… and doesn’t give a shit! But I’m not like that. His new album? I thought it was really good. He writes really well. I love his singing – he came through the standards albums like a total crooner. But, yeah, I like his new stuff.”

He went on to add “People ask me who I’m a fan of and Bob Dylan and Neil Young always make the list”.

The latest edition of Uncut magazine is a must buy for any fan of Paul McCartney. It comes with a collectors cover and a 1970 McCartney scrapbook. You can order it here.

Out this week, the new issue of @uncutmagazine features Paul on the cover talking about #McCartneyIII, with photography by @maryamccartney. Order a copy here for home delivery: https://t.co/N5N5O39UTM pic.twitter.com/S7bJwaYpx9

The latest outpouring of Dylan appreciation from McCartney comes after he told Sean Lennon, John Lennon’s son that Dylan was a huge influence on The Beatles.

Speaking on the BBC 2 Radio show to celebrate John’s 80th birthday last month, McCartney said “We certainly got a lot from Dylan and I know I had one of his first LPs at home before The Beatles. I used to play that quite a lot so I was steeped in him and I think your dad was too, but that was just one of the influences”.

McCartney continued “There’s an awful lot more because ‘Strawberry Fields’ and ‘Penny Lane’, those are very much us remembering our youth. And it’s a funny thing we used to say when we were little older, I mean, older, like 20 or something even – really young, like babies, you know – but we thought we were kind of men of the universe and big men by then as we get a little bit older.”

Recently, McCartney has been making more appearances and participating in interviews ahead of the release of his new album ‘McCartney III’. The new record comes out on December 11th.

The former Beatle has only announced the first and last songs on the record. They are called ‘Long Tailed Winter Bird’ and ‘Winter Bird/When Winter Comes’.

The new album comes in many different formats and is available to pre order here. Check out the trailer for it below!

What We Can Expect From Imagine Dragons Tomorrow!