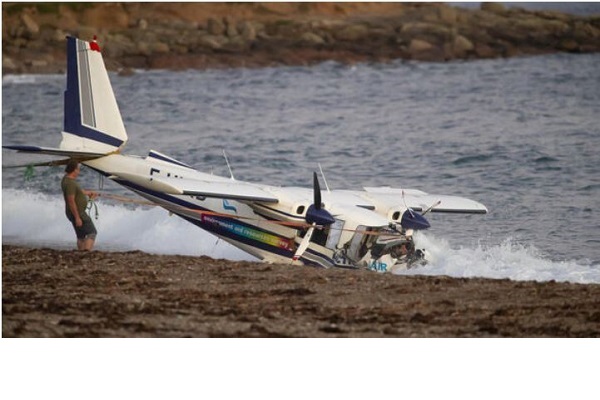 A pilot’s “skill factor” has been praised after a plane was forced into a crash landing at a beach in Wexford. Four people have also been rescued from the aircraft.

The aircraft had landed at the beach around 5-10pm.

Having hit an area of soft sand, the plane then moved violently forwards nose first into the sand. This resulted in the cockpit suffering severe structural damage.

Two coast guard helicopters, one based in Dublin and the other based in Waterford attended the scene, as did the Dunmore East RNLI and local coast guard to assist. Gardaí and the National Ambulence Service also attended.

The four people on board, were two women aged in the 30s and two men aged in their 20s and the other in their 50s. They were taken to hospital with non-life threatening injuries.

Barry O’Connor was the rescue pilot for helicopter 117. The pilot was praised for his “skill factor”, with a source saying he was faced with an “immediate threat”.

“This pilot was faced with a serious technical issue which presented an immediate threat to the safety of the aircraft and the passengers”, the source said.

They also added, “The aircraft was over water and the pilot was obviously faced with a problem that required getting the aircraft on the ground as quickly as possible. It doesn’t look like they had time to get to an airport”.

“The pilot appears to have done a great job by avoiding coming down on the water, and also avoiding large wind turbines which are close to the beach”.

A team of three inspectors, sent by the Department of Transport’s Air Accident Investigation Unit are currently looking into the incident.

They will try to identify the cause of the technical fault which forced the aircraft into a crash landing.

They will also examine the plane’s fuel systems and engines.

Man In Hospital After Shooting In Tallaght