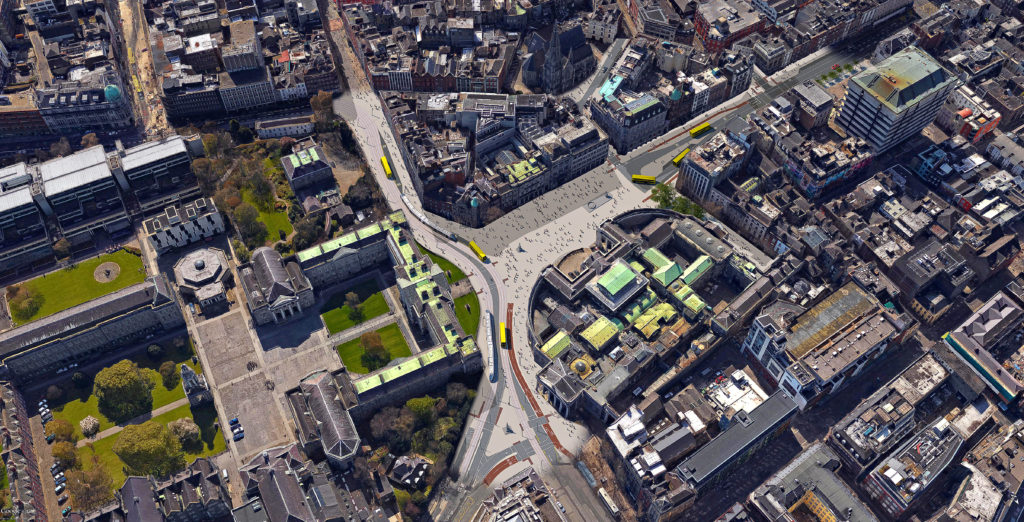 The Green Party have expressed deep disappointment today over the decision by An Bord Pleanála to refuse permission to Dublin City Council for their plan to develop College Green into a pedestrian plaza. Green Party leader Eamon Ryan:

“We are dismayed by An Bord Pleanála’s decision not to allow the College Green Plaza to proceed. Cyclists and Pedestrians are being ignored as Dublin is slowly but surely strangled by traffic.”

“An Bord Pleanála has ruled against the plan because it says it would effect bus traffic, but the National Transport Authority has said their new Bus Connects project would make sure the bus system could radically improve without the need to run every bus through College Green. We still desperately need more car-free child-friendly spaces in Dublin City.”

“What is happening in Dublin goes against the positive new planning approach that other cities are taking. It also goes against our own City Development Plan and transport hierarchy. The best cities are now taking out traffic to create civic spaces where the pedestrian and the cyclist are king. We are still going in the opposite direction and that direction is backwards.”

“The failure to get this through is symbolic of the wider problem in our transport system. There is not a single public transport project in construction at the moment. Other than the Royal Canal Cycle route there is not a single other cycling projects under construction. The opportunity to turn Dublin into a cycling city is being ignored by Shane Ross and Fine Gael. Today’s decision has to be a turning point. Our political priorities in transport have to change.”

Fianna Fáil Spokesperson on Transport, Robert Troy has pointed the figure squarely at the failure to address the city’s congestion:

“Part of the reason I believe, that An Bord Pleanála refused permission stems from the Government’s utter failure to address the ongoing traffic issues in Dublin City Centre.

“Chronic traffic jams in and around the College Green and along the city’s quays added to this rejection. An Bord Pleanála repeatedly pointed out the ‘unresolved capacity issues’ in these core zones of the city.

“Minister Ross and the Government must demonstrate a far greater level of ambition when it comes to making Dublin a better place to live and work in.

“There was a very poor level of coordination and cooperation between the agencies dealing with the proposed College Green Plaza: the National Transport Authority, Dublin Bus and Dublin City Council.

“Major projects like this must be delivered more efficiently. Fianna Fáil has long called for the establishment of a Dublin Transport Authority to coordinate major infrastructure projects in the city and ensure on-time, efficient delivery.”

Labour Senator Kevin Humphrey‘s has called on Dublin City Council to re-engage with all the key stakeholders and keep the College Green Plaza plans on their agenda:

“This is a very disappointing result for Dublin City. Most modern European capitals have pedestrianised Plazas which serve to enrich the city’s aesthetic and accessibility.

“Dublin City Council must immediately gather all the key stakeholders together and begin to develop a strategy to address the concerns raised by An Bord Pleanála.

“Traffic concerns and capacity issues were the primary issues with the submission and Dublin City Council will have to address these issues so that the Plaza project stays on the agenda.

“This is the second recent disappointment for DCC as a result of An Bord Pleanála objections. The Poolbeg development which was due to deliver 3,500 homes with the capacity for 8000 people to be housed has been delayed again.”

Business group Dublin Chamber said it was unsurprised by An Bord Pleanala’s decision to refuse permission for a pedestrian plaza at Dublin’s College Green, but has challenged planners to come up with a fresh proposal that will allow for a plaza to become a reality. According to Dublin Chamber’s Head of Public Affairs Graeme McQueen:

“Dublin Chamber has always been supportive of the concept of a pedestrianised plaza at College Green, but we were never convinced by the plans that were put forward. Our position was always one of qualified support, but repeated calls for stronger traffic analysis were never answered, It is unsurprising, therefore, that An Bord Pleanala have decided against the proposals. We remain supportive of more pedestrianised areas in Dublin. We absolutely need them. But increased public transport investment and proper planning is required to allow for that to be possible.”

“This is decision should not be seen as a victory for anyone. The traffic situation in Dublin, particularly around the core city centre, remains a daily problem for Dubliners that is significantly eroding peoples’ quality of life. The Bord’s decision is a result of decades of poor planning and significant under-investment in the city’s public transport network. The decision to repeatedly kick key projects such as Metro North and Dart Underground down the road is now coming home to roost. Having those pieces of infrastructure in place would make projects such as a plaza at College Green infinitely more possible.”

Tyrone Town Forced To Hold Its Nose After Getting Covered In...