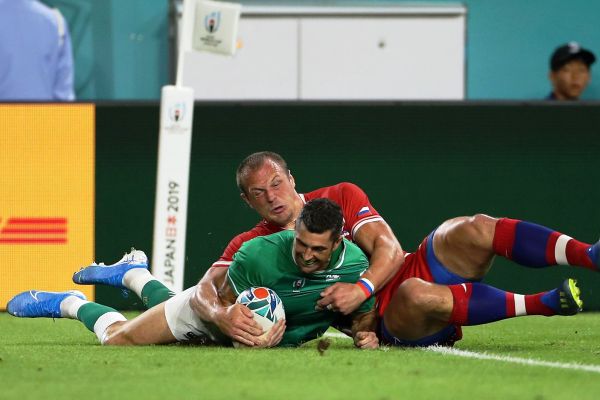 Ireland’s World Cup campaign is back on track after toiling past a game and hardy Russian outfit in Kobe today but it was anything but convincing despite a bonus point five-try win.

Their second Pool A victory leaves Joe Schmidt’s side on course for the quarter-finals but they will need an exponential improvement to even remotely live with world champions New Zealand or Rassie Erasmus’s powerful South Africa.

After missing the defeat to Japan with a quad injury, Ireland’s playmaker Johnny Sexton controlled the opening 40 minutes against Russia, before coach Joe Schmidt wrapped him up in cotton wool again and introduced his replacement Jack Carty in the second half.

Ireland’s other fly-half, Joey Carberry, had to pull out after he had aggravated an old ankle injury. They also lost Jordi Murphy, with a rib injury. Somehow a 35-0 win still leaves plenty to worry about.

Sexton, captaining Ireland for the first time was mercurial and made two assists for tries, one with an inside pass to Rob Kearney after only a minute for the first try and the other a grubber kick for Peter O’Mahony who touched down in the 12th minute.

Ireland were very error strewn overall and at one point Kearney, Conway and Garry Ringrose let a high ball bounce between the three of them in their 22, which Russian winger Denis Simplikevich almost profited from. Russia were down to 14, Bogdan Fedotko was sin-binned, when Rhys Ruddock was able to bash his way over for their third try of the half.

Their fourth, which secured the crucial bonus point took an age to come, and after 21 second half minutes even though Russia were again down to 14 with Andrey Ostrikov yellow carded for an illegal clear-out. Conway finally got over, in the 61st minute, after Earls gathered a chip by Carty. Ringrose added a fifth try after help by Earls and Jordan Larmour.

Next up for Ireland’s hit and miss campaign is their final Pool A game against Samoa on Saturday October 11th in Fukuoka.

Varadkar Reveals When €1k Covid Frontline Bonus Will Be Paid