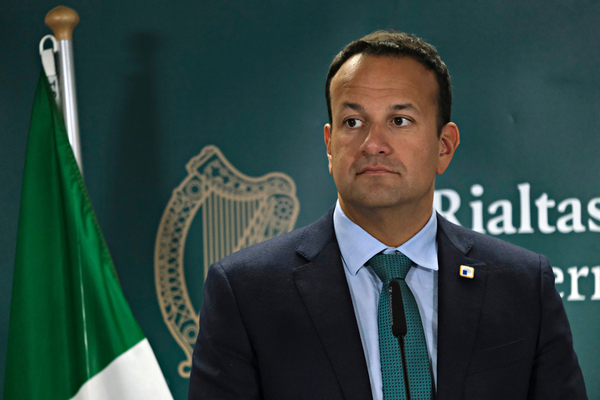 Heavy criticism from politicians of various parties has been directed toward anti-vaccine protestors who crowded outside the home of Tánaiste Leo Varadkar yesterday afternoon. Footage of the ugly scenes in Dublin 8 depicted a flurry of anti-vaccine messages, and homophobic slurs directed toward the Tánaiste and his partner, Matt.

In one such video, around 25 people are present at the “demonstration” with several participants holding placards of false anti-vaccine messages. While another video contained its creator using disgusting, homophobic slurs against the Tánaiste. In both videos, a placard is clearly displayed attached to the door of a residential property at the scene.

Several gardaí were present at the scene, with An Gardaí Síochána releasing a statement: “Gardaí were alerted to a number of protestors outside a residence in Dublin 8 on Sunday September 19th, 2021, at approximately 1pm. Gardaí attended, and the protest ended without incident.”

Last week, a similar anti-vaccine protest took place outside the home of Health Minister Stephen Donnelly. Footage of the occurrence has shown one protestor declaring that “each and every politician is getting a visit off us”.

Politicians from both government and opposition parties join in criticism of yesterday’s protest, with Finance Minister Paschal Donohoe describing it as “appalling”. Donohoe believes the privacy of the family home should be respected by all, no matter the owner’s role in society.

“I think it is just appalling what happened,” he said. “I believe public representatives have great privilege and honour to be representing their communities in the Dáil and to be working in Government. But I also believe the privacy of the family home is something that should be respected by everyone.”

Higher Education Minister, Simon Harris also stands by in solidarity with Varadkar and has described the scenes as “below the belt”. Harris, who has had his own dealings with angry protestors a number of years ago, said this was the action of thugs, not protestors. Speaking on Radio Kerry in advance of visits to MTU and the Kerry College of Further Education, Harris said such protests had no place in democracy and should be condemned.

Taking to social media, Harris said protestors had shown: “Sickening, repulsive, disgusting behaviour outside the home of Leo Varadkar and [his partner] Matt. It has no place in a democracy, must be condemned by all & called out for what it is. Efforts to dehumanise politicians contributes to this. Vile on so many levels.”

Sinn Féin president Mary Lou McDonald said: “The homophobic, bigoted intimidation witnessed at the home of Leo Varadkar today is outrageous and shameful. The perpetrators must be held to account.”

Protestors have also been criticised by Social Democrats TD, Gary Gannon, who said: “What occurred outside Leo Varadkar’s house today was nothing short of vile. Blatant homophobia has no place in our Republic and should be confronted wherever it occurs.”