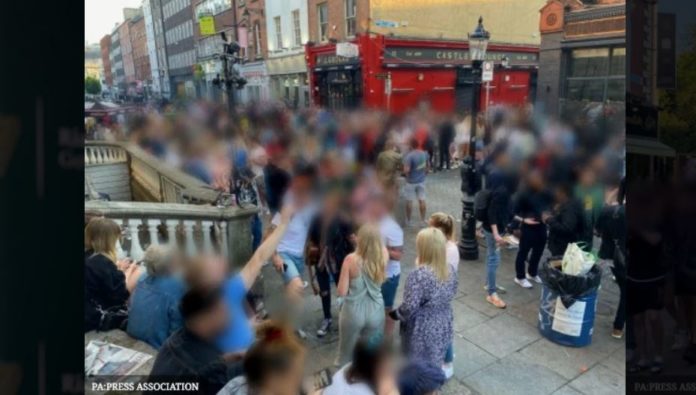 Tánaiste Leo Varadkar has said that there is “always a risk” of an overreaction when footage of large crowds and large gatherings is made public.

“We shouldn’t lose sight of the fact that we are actually encouraging people to meet outdoors”, Varadkar said.

This comes after the CMO, Dr Tony Holohan recently tweeted his displeasure at the large crowds he saw in Dublin City Centre.

Drove into Dublin City Centre to collect someone from work at 815 PM. Absolutely shocked at scenes in South Great George’s St, Exchequer St, South William St area. Enormous crowds- like a major open air party. This is what we do not need when we have made so much progress.

The Chief Clinical Officer Dr Colm Henry accepted that it has been a “tough year” for everybody, but warned that the virus has not surrendered and the pandemic “war” continues. He said that the weekend scenes looked like “V Day”.

People being encouraged to socialise outdoors

“Certainly, what I saw around town yesterday – around Herbert Park, around Donnybrook around a lot of town – was people gathering in the outdoors responsibly, sitting in relatively small groups”, he said.

“Not going to change it now” – Varadkar on decison on pubs

Varadkar did acknowledge that scenes like the incidents referred to by the CMO will hopefully be avoided going forward.

“I didn’t like to see the scenes we saw in South William Street the other day or some of the problems they have seen in Cork or places like Portobello Plaza but we shouldn’t lose sight of the fact that we are actually encouraging people to meet outdoors”, he said.

The Fine Gael leader also added that the government have decided not bring forward to reopening dates for restaurants and pubs to avoid more incidents such as last weekend in the future.

“The decision is Monday (June 7) and that is what is going to happen”, he said. “That is the Cabinet decision on that. We did toy with that possibility but we are not going to change it now”.

“It does appear that the weather is not going to be so nice this weekend unfortunately but that is probably a good thing in terms of people congregating outside”.

The Tánaiste also warned that local lockdowns remain an option for some counties. More on that here. Check out a recent tweet from the Fine Gael leader below.

Today we launched stimulus of more than €4bn. We’re going for growth and backing business, extending the EWSS, the 9pc tourism VAT rate, commercial rates holiday and tax warehousing. I believe our economy will take off like a rocket #economicrecoveryplan pic.twitter.com/7UNB9Cu6e9