Home News Relief As Elusive Parrot Is Returned To Owner 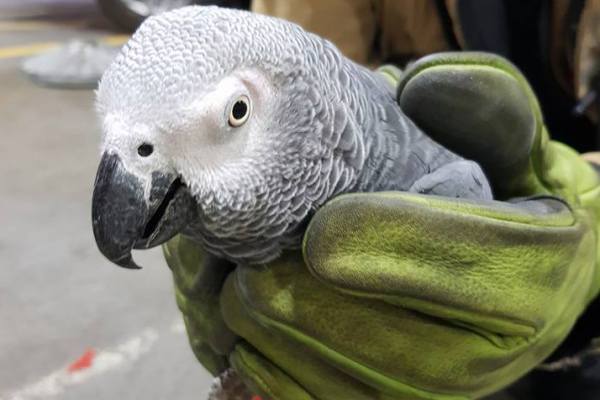 A Slovak speaking parrot found at Dublin Airport has been reunited with its rightful owner … through rather bizarre means.

The African Grey bird was taken in by staff at the airport on Sunday after escaping from its Finglas home at the weekend.

Dublin Airport launched a social media appeal to reunite Hugo – a girl parrot with a boys name – with her owner.

And it was Lidl to the rescue – the supermarket replied to say one of its stores had a missing parrot poster.

However, the plot thickened when four people came forward to claim the parrot was theirs. One of the four said his African Grey could “speak a few words of Slovak”.

The owner plans to meet the fire fighter who rescued her shortly to offer his thanks in person. Paul O’Kane from Dublin Airport says that’s when they turned pet detectives:

”Lubomir, whom it transpired was the owner said to us that the parrot spoke some words of Slovak so we had the idea of getting him to record an audio clip of him talking to the parrot and we then passed it to the animal shelter in Kildare. They were able to play the clip for the parrot and the parrot was instantly excited, so it was clear to him instantly that Lubomir was the owner of the parrot.”

He says the love between them was clear:

”She immediately flew onto Lubomir’s arm, that’s her owners arm, and snuggled into his neck and he had brought her a little slice of orange which is her favourite treat and she was really excited and he was absolutely thrilled.”

We’ve solved the missing parrot mystery & reunited her with her owner Lubomir, who is thrilled. We did it with a Lidl help from a supermarket chain, an animal sanctuary & modern technology. Hugo – a girl with a boy’s name – is now safely home. https://t.co/Ib7AWxf8rd 🦜 🦜 pic.twitter.com/BD9qt9haSQ