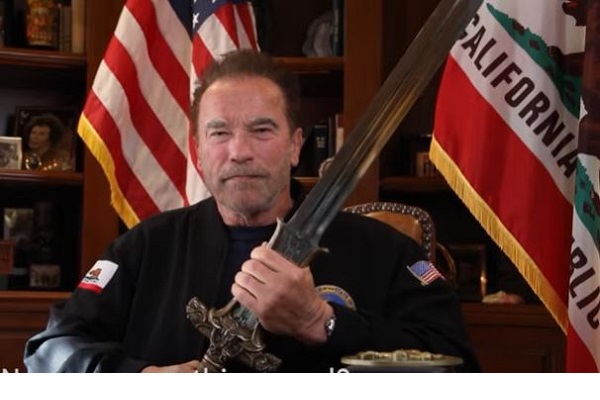 Arnold Schwarzenegger held up a sword while giving a rousing speech on the events which unfolded at the Capitol last week. The former Conan The Barbarian actor shared a rousing speech on social media this past Sunday, slamming Donald Trump and complicit Republicans by comparing the U.S. Capitol riot to Kristallnacht. The former Governor of California shared with the world his thoughts on the events which took place that night, whilst sharing some very personal memories.

“I grew up in Austria. I’m very aware of Kristallnacht, or ‘the Night of Broken Glass.’ It was a night of rampage against the Jews in 1938 by the Nazi equivalent of the Proud Boys,” Schwarzenegger said. “Wednesday was the Day of Broken Glass right here in the United States. The broken glass was in the windows of the United States Capitol”.

The former 80s icon, from movies such as Conan the Barbarian and Terminator, warned the public that people were also coaxed into horrendous crimes against humanity for the Nazis and should not let history repeat itself today.

Schwarzenegger explains that the mob did not just shatter the windows of the Capitol but they also “shattered the ideas we took for granted”. A passionate Arnold said they “trampled the very principles in which our nation was founded”.

Schwarzenegger then went on to blame Trump for inflaming racism and anti-Semitism, as well as how he attempts to overturn the election incites his followers. Trump’s social media platforms were suspended following the riots. He declared that the soon to be former President is a “failed leader” who will go down in history as “the worst president ever,” before adding that the good thing is “soon he’ll be as irrelevant as an old tweet”.

Throughout the interview, Schwarzenegger can be seen holding a huge sword that was used in the 1982 action adventure, Conan the Barbarian. He wielded the sword and compared democracy to its strength. The former body builder held up the sword and said, “democracy is like the steel of this sword. The more it is tempered, the stronger it becomes.”

He calls a number of his party members “spineless,” and guarantees that their names would never be imprinted into fine books like John F. Kennedy’s Profiles in Courage. “They’re complicit with those who carried the flag of self-righteous insurrection into the Capitol,” said a disgusted Schwarzenegger.

“We need to hold accountable the people that brought us to this unforgivable point,” declared Schwarzenegger. “We need to look past ourselves, our parties and disagreements, and put our democracy first. And we need to heal, together, from the drama that just happened. We need to heal, not just as Republicans and Democrats, but as Americans.”

Watch the full clip below.

Bryan Adams So Happy He’s Coming To Dublin, It Hurts!