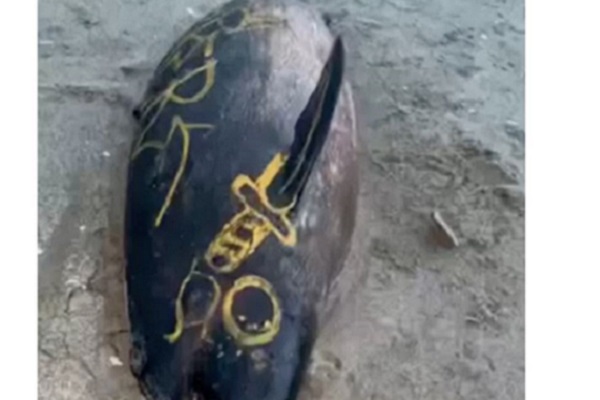 Photographs of a deceased dolphin who has been vandalised have been shared online. The dolphin was found washed up on a beach in Poolbeg last month.

Photographs were shared via the Instagram page of MyViewOfIreland and have been widely condemned.

The photographer for this page revealed that he noticed the dolphin, while he was out walking on the beach on Monday. He added that the sight of the dead dolphin was sad, “never mind the graffiti thing”.

“I didn’t think it was a dolphin but I went and had a look. I was surprised to actually see it”, he said. “It was only when I went around the side of it that I saw all the graffiti all over him”.

He ellaborated further on his disgust, “That just sickened me, to be honest with you. I was actually floored even the next day. I couldn’t get my head around it. How does someone do that?”.

“terrible to see that”

The image of the dead dolphin was also condemned by Strandings Officer for the Irish Whale and Dolphin Group, Stephanie Leavesque.

“People have absolutely no respect. It’s terrible to see that”, she said.

Ms Leavesque also revealed that it would be wise to leave a deceased whale of dolphin on the beach, without somebody touching it. It is best for the dead animals to be removed, especially on a beach where there are dogs and children.

She told the Irish Examiner, “If it’s in an area where it’s not in anyone’s way, I would recommend to leave it there because it is an important food source for the surrounding ecosystem”.

Some animals including dolphins which arrive washed up on the beach can still pose a health risk to anyone who touches them.

“They can carry zoonotic disease. So that’s diseases that can be transferable to humans. You don’t know how that animal died”, Ms Leavesque added.

Dublin City Council have subsequently released a statement, where they confirmed that the deceased dolphin has been removed.

“Our District Parks Officer was also notified. The carcass has now been removed for responsible disposal by DCC staff”, they said.

People have also been advised to contact the IWDG immediately if they notice a dead animal on a beach.

In other news, two youths were found guilty of a violent disorder at a Dublin train station over the weekend.

Man Arrested After Walking Into Dublin Pub With Shotgun