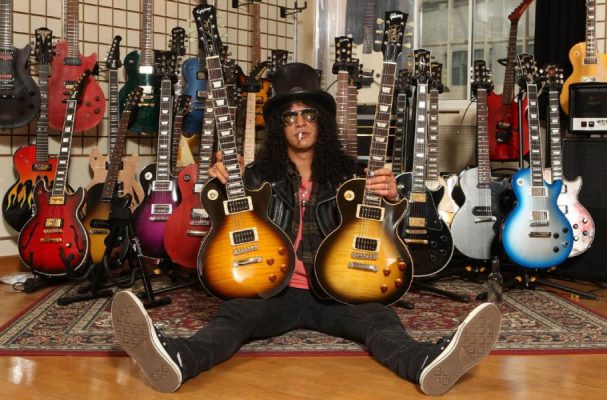 As speculation mounts concerning movements in the AC/DC camp, axeman, Slash has expressed his excitement at the thought of the rockers return to action.

The Guns N’ Roses guitarist shared his feelings on the band via, CoS: “AC/DC is bar none, with the exception of the Rolling Stones, the greatest rock ‘n’ roll band ever. The Stones will always come first for me and then AC/DC.”

“There are no other bands that actually play that brand of really ’50s-influenced straight-up rock ‘n’ roll like AC/DC. I love them for that.”

Slash waxed lyrical and Phil Rudd’s epic work behind the kit saying that he thought, “Phil Rudd is one of the best drummers of all time. So anytime he was not in the band, I was always disappointed.”

The GNR guitarist continued: “But it’s great that Cliff [Williams is] going to be back because I remember being backstage with those guys at the end of the last tour and him saying that he was gone and that he was retired. So it’s great that everybody’s back, but it’s especially awesome that Brian [Johnson] is back.”

AC/DC members were seen at a Vancouver recording studio last summer as rumours spread that the band were working on cutting a new record. The set is expected to feature unused recordings by late guitarist and co-founder Malcolm Young.

Young sadly passed away in 2017 at the age of 64 after retiring from the group three years earlier due to dementia.

Stage Times For Electric Picnic – All You Need To Know