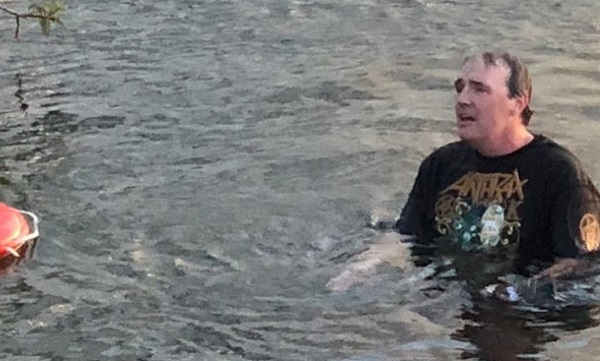 Last year, Chris LaRocque from Oshawa was evicted from a Slayer show at Toronto’s Budweiser Stage. The show also featured Anthrax, Lamb of God, and Behemoth

That was as the uber metal fan tried to swim back to the venue. The Budweiser Stage is set up like an island, surrounded by the waters of Lake Ontario and accessible by bridge.

Anthrax’s  guitarist Scott Ian, who spotted LaRocque called him the “fan of the tour.” According to Exclaim via CoS, Budweiser itself are honouring LaRocque’s passionate loyalty to the band by enshrining the infamous “Slayer Swimmer” on a commemorative beer can.

The special limited edition bevvy is being released to celebrate the 25th anniversary of the venue. The can celebrates 25 artists that have played at the venue since it opened in 1995. LaRocque can be seen in his infamous Anthrax shirt at the bottom of the can.

Sharing the special tribute LaRocque commented on Facebook: “I wonder if I can get free beer?”

CoS observes it remains unclear if LaRocque was initially kicked out of from the venue during the show.

However, security did not let him back in despite his impressive nautical activities and Slayer guitarist Gary Holt pleas, who attempted to persuade staff to let LaRocque back in.

Here’s hoping LaRocque can take comfort in the fact that he has been honoured on a Budweiser can!

Dude Who Tried To Swim Back Into A SLAYER Show After Being Ejected Immortalized on Beer Can https://t.co/3oR5VSkXR0 pic.twitter.com/Si1cs8e4Mz