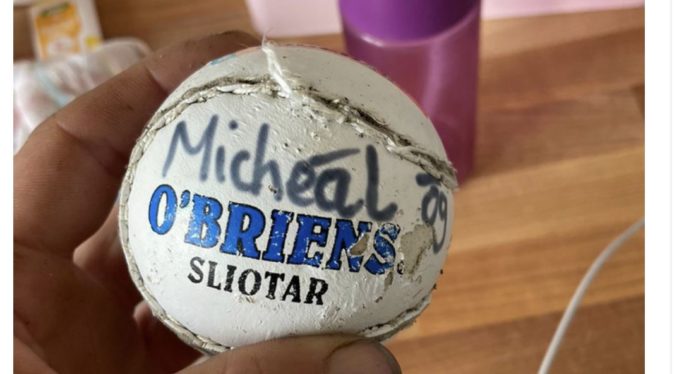 A sliotar which went missing in co Cork has been discovered along a beach in South Wales. The sliotar had made the incredible journey across the Irish sea.

The ball was found on Cefn Sidan beach between Burry Port and Kidwelly by Darren Acteson who discovered the name “Michéal Fogarty” was written on the ball.

Acknowledging that it was probably a “long shot”, Acteson appealed to his Irish followers to reunite the sliotar with its righful owner.

“A long shot but does anyone know Michael Dwan Fogarty??”, he tweeted. “We found his Hurling ball while fishing,washed up on Cefn Sidan beach which is between Burry Port and Kidwelly in South Wales”.

A long shot but does anyone know Michael Dwan Fogarty 🇮🇪??,we found his Hurling ball while fishing,washed up on Cefn Sidan beach which is between Burry Port and Kidwelly in South Wales🏴󠁧󠁢󠁷󠁬󠁳󠁿 pic.twitter.com/peGqPHiiSI

“We found it out walking on Cefn Sidan beach at night and it caught our eye because we didn’t know what kind of a ball it was”, Darrren also told Cork Beo.

“My mate took it home for the dogs, it was only the next day he saw the name written on it and we realised it was a Hurling ball”.

The ball was found a few months ago, but yesterday Darren had the idea that maybe his Irish friends that he chats to on social media may help him with tracking down this “Michéal Fogarty”.

He was right, as within 15 hours of the tweet being posted, mission was accomplished.

“It just absolutely took off”, Darren said. “I only thought it would be tidy if it could get it back to the young lad cause I’ve been to Ireland, and your country is outstanding”.

“I work in Belfast now and again with an infrastructure company and have seen the boys walking around with those Hurling sticks in groups, so I figured this sliotar could be important to someone”, he continued.

Darren also added that he “loves visiting Belfast so maybe this is a sign that I should travel on down to Cork when I’m next over in August and make sure this boy gets his ball back”.

Two men who work with Michéal Fogarty’s father also confirmed that the ball does belong to their colleague’s son.