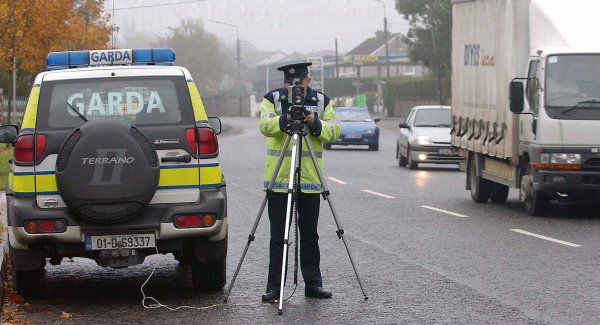 Speeding checkpoints are being mounted across the country as part of ‘Slow Down’ Day.123 people have died on our roads so far this year.

For 24 hours, the Garda roads division is pulling out all the stops to detect speeding motorists.There’ll be Garda vans and laser checks as well as 50 ‘Go Safe’ vans in areas where speeding is common.

But motorists can check where the checkpoint locations are on the Garda website.

“We advertise it to let people know we are going o be out there..it’s an awareness-raising campaign – we want to people to be safe on the roads. We don’t want to investigate collisions on the roads.”

With Storm Brian expected to bring high winds across the country, and rain in parts, drivers should heed warnings to slow down. Last Friday, a driver was caught doing 90km in a 50km zone, just yards from a school in Galway. Garda Cloughley says it’s unacceptable;

“If a child stepped out in front of the school or if a car blew a tyre…we are talking about a very, very serious incident there  – and probably fatal”.

“A Credit To His Profession” Tributes Pour In For Late Garda...