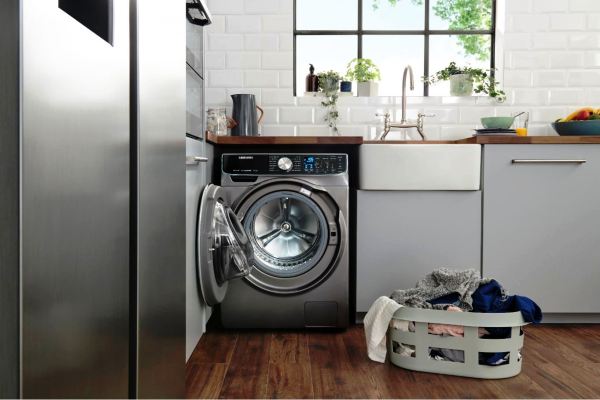 New research has found that over a quarter (26%) of Irish households do more than ten loads of washing per week but 79% claim they don’t mind doing the washing.

Households with children have the biggest washing loads. 31% of those surveyed who have children said they do in excess of 10 loads of laundry a week.

The research of 532 Irish adults was carried out to celebrate Samsung’s range of washing machines which feature its revolutionary washing machine technology QuickDrive™.

Samsung’s exclusive QuickDrive™ technology provides consumers with the power to dramatically reduce the time it takes to do a load of laundry in half and reduce energy usage by 20%.

The WW8800 comes with Samsung’s Innovative AddWash™ door, a feature that gives users the ability to add items at any time [3] during the cycle.

According to the survey, almost half (49%) say that the average wash takes an hour while a third say each load of laundry takes approximately two hours which means we’re spending significant hours a week just washing clothes.

It also seems that many of us are wasting time and energy on half loads. 20% admit they don’t put a full load of washing in each time they turn on their washing machine.

Adding to our laundry pile is the fact that many of us forget to take the washing out of the machine.

62% say they have had to rewash clothes because they left them in the machine for too long.

The research finds that many of us are terrible at following instructions.

A fifth (19%) of people polled say they never read the washing directions on the clothing label and 39% say they only follow it sometimes.

However, when it comes to separating out our colours from our darks, a saintly 84% say they always separate their washing before putting it into the machine.

The most popular categories to separate washing into are:

To help counteract these issues, the Samsung QuickDrive™ washing machine offers a range of smart and convenient features to give the user more control over their wash and help them decide what cycle setting to choose.

The IoT-ready machine boasts a smart management system, which can be controlled by your smartphone and provides three key smart features that help manage laundry more conveniently:

Enables consumers to manage a laundry finishing time via their smartphone, freeing consumers to control their schedule on their own terms.

It provides automatic recommendations for optimal wash cycles based on the information such as colour, fabric type, and degree of soiling inputted by the user, eliminating the need for guessing about which cycle is best.

From shrinking clothes to putting a coloured sock into a white wash, we all have our laundry bugbears.

The Samsung survey reveals that the top 5 washing woes are:

Commenting on the findings, author and Productivity Ninja® Grace Marshall said: “In the office, I help people get on top of their workload, and get their email inbox to zero. They often tell me that in the home, having a laundry basket at zero is even more of a holy grail.

Laundry one of life’s unavoidable chores, and it can take up a huge amount of our time and headspace. That’s where technology can help. Samsung’s QuickDrive™ technology cuts washing time by a half [1]. Given a quarter of Irish households are doing more than 10 loads a week, that’s a significant number of hours a week.

We all have busy lives, and no one has time to sit around waiting for the washing to finish. It’s no wonder so many people end up having to rewash clothes that have been sitting in the machine for too long. Samsung’s Smart Washer app gives you remote control of your washing machine from your smartphone, so you can time your washing to finish just as you get home from work – or the school run – or delay it if you’re running late.

Plus, that pesky sock you spot just as you’ve put the washing on? There’s finally a solution – a handy drawer on the door which allows you to add a forgotten item!”

1. Sort first, wash later. Rather than sorting your clothes when it’s laundry time, keep separate laundry baskets for lights/darks/delicates, etc. That way sorting happens up front and distributes the workload across the family. Plus, when a basket gets full you can put it straight in the washing machine.

2. Pairing socks is over-rated. It’s amazing how many people wear odd socks – some proudly, some stealthily. If the thought of that makes you uncomfortable, then buy a big batch of the same socks so that every sock matches. Either way, pairing socks after washing becomes a redundant activity. If you must pair socks, then use a mesh bag to keep them together – but don’t over-stuff or they won’t wash properly.

3. Using a tumble dryer? Ditch the ironing. Most clothes don’t need ironing if they’re hung up straight out of the tumble dryer.

4. Hanging up the washing? Group each person’s clothes together on the line. That way when you take it off the line, it’s already batched up by room. Bonus points if you get each person take their own clothes off the line and put them away.

5. Make it fun (but not too fun!) If you’ve got a pile of folding to do, do it in front of the TV, or while on the phone chatting to a friend. A little bit of light distraction can help make it less onerous. Although be careful not to multitask too much, as one man found out when he decided to do the ironing while watching boxing and drinking a beer – when the phone rang, he picked up the iron (ouch!)

Run Into Summer With A Colour Rush