The Advertising Standards Authority of Ireland have banned an advert for tampons after 84 complaints were issued against the ad.

Released in April, the scene set is a chat-show called Tampons & Tea where our host discusses how to correctly insert a tampon.

What follows is an on-screen demonstration of how to correctly insert a tampon, featuring the woman inserting the  applicator from one hand into a circle created by the other hand to mimic a vagina.

Complaints included that the ad was demeaning to women by implying that they did not know how to use the product, or read the instructions; that it sexualised the use of tampons; and that it was not suitable for young children. None of these complaints were upheld.

The ASAI said that they were used to describe how to use the product correctly and that the demonstration that accompanying it was neither explicit or graphic.

However, they did uphold a number of complaints that the advertisement like all others is designed so to be used so ”that advertising should not cause grave or widespread offence. The Committee noted that the advertisement, although light-hearted in nature, provided factual information in a manner that was neither explicit nor graphic.” 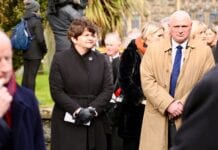 Arlene Foster Suggests That The UK Could Give Ireland Extra Vaccines