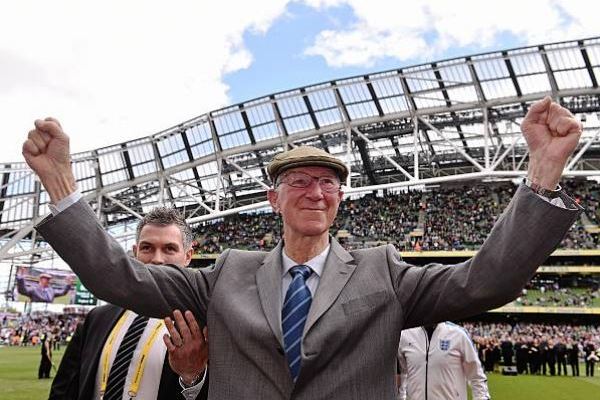 The FAI are today celebrating ‘Jack Charlton Day’ on what is the 85th birthday of the beloved former Republic of Ireland manager.

‘Big Jack’ succeeded Eoin Hand as Ireland boss all of 34 years ago. No one could have possibly foreseen the impact that the big Geordie would have had on Irish football.

Less than two years after his appointment he guided the Republic of Ireland to it’s first ever major international tournament at Euro ’88 in the then West Germany.

The gifted Irish team, albeit playing a fairly safety first, restrictive, hard working and defensively sound philosophy, came ever so close to reaching the semi-finals.

A never to be forgotton Ray Houghton header stunned England in a memorable 1-0 win in Stuttgart before a 1-1 draw with the USSR set up Ireland for the final game with Holland.

The eventual tournament winners only scraped past Ireland courtesy of a freak headed goal from Wim Kieft. That however, was only the apperitif for Irish football fans.

The former Leeds boss, amid scenes of national hysteria guided the boys in green to a first ever FIFA World Cup Finals at ‘Italia 90‘ in a summer never to be forgotton.

A draw with England thanks to a leveller from Kevin Sheedy, a dour draw with Egypt before Niall Quinn secured a point in a 1-1 draw with the Netherlands saw Ireland reach the last-32

The country was in raptures and it would only grow and grow as unlikely hero David O’Leary scored an iconic penalty to beat Romania in a shoot-out in Genoa after Packie Bonnar’s glorious dive to he right to deny Daniele Timofte on a sizzling sunny June Wednesday.

Ireland’s heroes were now on the precipice of immortality as they headed to the Eternal city of Rome awaiting the hosts Italy in a World Cup quarter-final at the Stadio Olimpico.

Despite a gallant showing against the Azzurri, a solitary strike from the home hero ‘Toto’ Schillachi ended Ireland’s dreams. Defiant to the last the squad and Jack returned to a welcome fit for winners in Dublin with an approximate 250,000 turning out to welcome home the squad.

Ireland were in their pomp under Jack Charlton in this time and despite agonisingly missing out on a place at Euro ’92 in Sweden, Jack’s army were on the road once more for USA ’94 and a second successive World cup appearance.

In the cauldron of heat and sound at Giants Stadium, a mercurial Paul McGrath was immense as Ireland stunned eventual finalists Italy 1-0 thanks to that man Ray Houghton, once more lobbing Gianluca Pagliuca amid the din of the massed ranks of Irish fans in New Jersey on a balmy Saturday evening.

Sadly stateside that was as good as it got for Jack’s Ireland after a 2-1 defeat to Mexico in the human fryer that was Orlando, before a dour 0-0 draw with Norway again in New Jersey. Ireland advanced to the last-32 but the dream died as Ireland crashed out 2-0, well beaten by the Netherlands after goals from Wim Jonk and the great Dennis Bergkamp.

Big Jack bowed out among the hoardes of Irish fans at Anfield, the home of Liverpool, as again the Netherlands proved the nemesis crushing Ireland’s hopes of reaching Euro ’96 in neighbouring England and with it a fitting send off for Jack.

However all that amounts to is the glorious decade of Irish football under one Jack Charlton. A legacy that will endure. A freeman of Dublin. Beloved in Ireland. Happy birthday Jack Charlton!

To celebrate, we're having a 'Jack Charlton Day' to celebrate all of his fantastic achievements 🙌

🎂 Happy 85th birthday to Jack Charlton – a man beloved in two countries and respected across the world 🌍 pic.twitter.com/oyTrRvvind

🎥 GOLDEN MEMORIES | Let's recall some of the highlights for Ireland 🇮🇪 under Jack Charlton#HappyBirthdayJack | #COYBIG pic.twitter.com/uGDPrwvx3N