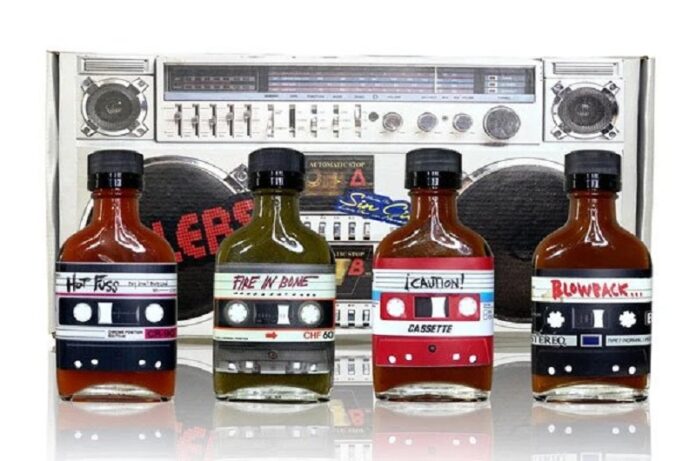 The Killers have announced that they are releasing their own brand of hot sauce for a limited time only.

The collection is called ‘The Killers Hot Sauce’ and features four different flavours all named after their music, called ‘Hot Fuss’, ‘Fire in the Bone’, ‘Caution’ and ‘Blowback’. They range from 1 to 10 in terms of hotness.

In a statement, the band said “First of all, thank you for getting involved with our hot sauce! We’ve been involved, with the idea at least, for years. You might say starting the band was just a means to make hot sauce. Yeah, it’s that good. Hotter than Vegas, and with four tasty flavours, it’s more than we thought we’d pull off, to be honest”.

“Made by hand, in small batches using only the finest ingredients like aged chilis, habanero peppers, cayenne peppers, hickory-smoked sea salt, and a dash of real sin from Las Vegas to make this most fabulous hot sauce on the market. So get ready, folks. Oblige your senses and pair with your favourite food and Killers records. DO IT! Your pals in music and sauce.”

Currently, they are only available in a special four-pack edition and are limited to 2,500 for now. The hot sauces cost €49 and are available to order here.

In recent years, hot sauces have become extremely popular. The YouTube show called ‘Hot Ones’ has had a huge role in their popularity. Celebrities, Musicians, Actors, Wrestlers and many more are interviewed by host Sean Evans as the chow down on hot chicken wings.

The Killers have also made their Christmas album, ‘Don’t Waste Your Wishes’ available for streaming for the first time. The album consists of all the festive singles the band have released and has collaborations with Elton John, Toni Halliday, Jimmy Kimmel and many more.

The band are also set to feature on season 2 of Netflix’s adaptation of the podcast, Song Exploder.

Netflix The Sh*t Out Of The Bank Holiday Weekend!