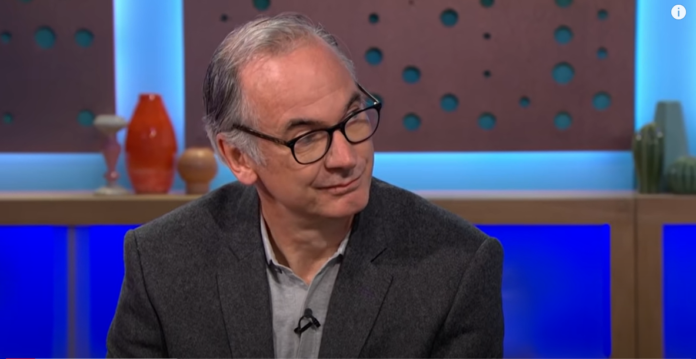 Ritter’s agent confirmed the news to the Guardian yesterday. He said that Ritter had passed away peacefully at his home. His family were also by his side.

Paul Ritter had been suffering with a brain tumour.

Ritter starred as dad Martin on Channel Four’s Friday Night Dinner alongside Tamsin Greig, Simon Bird and Tom Rosenthal. His character had a legacy of iconic phrases including “That’s a lovely bit of squirrel” and “S**t on it!”.

He also appeared in James Bond and Harry Potter films and starred in the TV series, Chernobyl.

It also said, “It is with great sadness we can confirm that Paul Ritter passed away last night. He died peacefully at home with his wife Polly and sons Frank and Noah by his side. He was 54 and had been suffering from a brain tumour”.

Paul Ritter also played, “an enormous variety of roles on stage and screen with extraordinary skill”.

“He was fiercely intelligent, kind and very funny. We will miss him greatly”.

Tributes poured in for the talented Mr Ritter

Rosenthal said, “Anyone who’s seen Friday Night Dinner knows the amount of s**t we put him through and I never once heard him complain”.

“I’ll be forever thankful for working with someone who was so supportive and who taught me so much about professionalism and humility in acting. It was a total pleasure and honour”.

Friday Night Dinner’s creator Rob Popper added, “Devastated at this terribly sad news. Paul was a lovely, wonderful human being. Kind, funny, super caring and the greatest actor I ever worked with”.

Actor and comedian Stephen Mangan also wrote, “Trying to find a way to talk about Paul Ritter and struggling. My friend since we were students together. So much talent and it shone from him even as a teenager. I was so lucky to know him and lucky too to work with him many times over the years. Wonderful man. RIP”.

“Knocked it out of the PARK in Chernobyl. Watching it I consciously thought, “Oh, we have a new movie star.” Between that & how funny he was in Friday Night Dinner… just unreal talent. Rest in peace, Paul Ritter”.
The James Bond Official Twitter account wrote, “Paul Ritter, who appeared as Guy Haines in Quantum of Solace, has very sadly passed away. Our thoughts are with his family and friends”.
Other tributes include Omid Djalili, Sharon Horgan and Daniel Mays.